The Pingyao International Film Festival opens on January 14, with Wang Ziwen and Yin Fang starring in the opening film

On January 11, the 6th Pingyao International Film Festival officially announced that it will officially kick off in the ancient city of Pingyao on January 14. This year's film festival will continue the original program structure, and continue to hold related screenings and activities around the four sections of screening, industry, education, and academics. The 6th Pingyao International Film Festival has started to call for films as early as May 2022. According to the usual practice, the film festival that should be held in the Year of the Tiger has been postponed until the beginning of 2023. Finally, it has not been dragged into the Year of the Rabbit. The Paper reporter reposted this news in Moments on January 11, with the text: "Because of the Year of the Rabbit, there will be a seventh edition." This Moments immediately won the praise of Jia Zhangke, founder and director of the film festival.

This year's Pingyao International Film Festival took the lead in announcing the shortlisted and recommended projects in the industry sector. 16 script projects, 12 film projects in production, and 18 literary works with film and television adaptation potential were shortlisted for "Pingyao Venture Capital" and "Developing Film Project" respectively. " and "Migration Plan·From Literature to Film and Television" three industrial units. It is also reported that the Pingyao International Film Festival has successively announced the screening films of each unit, and will open tickets to the public.

On January 12, the 6th Pingyao International Film Festival officially announced the official poster and theme. The theme of the film exhibition is "Pingyao Code ≠ COLD". Endless efforts, perseverance and confidence in filmmakers are important codes to promote the continuous development of film art. We call on everyone to come to Pingyao to pass on heat and welcome the spring. "Gentle Shell", directed by Wang Mu and starring Wang Ziwen and Yin Fang, will be the opening film of the 6th Pingyao Film Festival. The film won the "Qiandu · Creativity Award" of the third Pingyao Venture Capital Unit, and is Wang Mu's directorial debut. 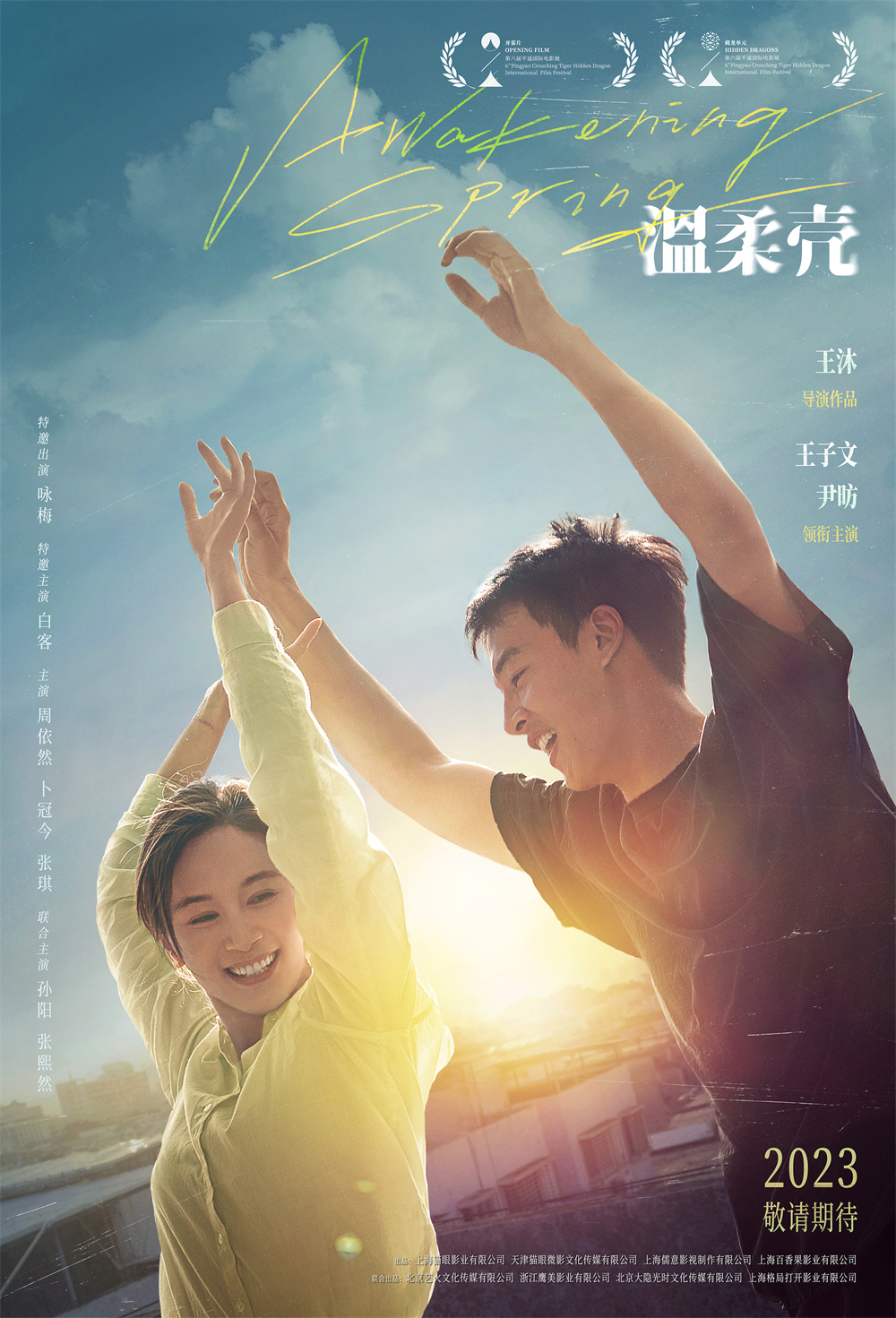 The Pingyao International Film Festival is jointly sponsored by Pingyao Film Exhibition Co., Ltd. and Shanxi Film Academy of Shanxi Media College. It is held every year in the ancient city of Pingyao with a history of 2,700 years. The previous five film festivals have been successfully held from 2017 to 2021. At present, many film projects that have emerged in the industry sector of Pingyao International Film Festival, such as "Life Events", "Gentle Shell", "Love Song 1980", "The Whale That Doesn't Swim in the Sea", "Reunion" and "Moonlight Warrior", have been released nationwide or The post-production has been completed and has attracted much attention from inside and outside the industry.

"Pingyao Venture Capital", the permanent unit of the industry section of this year's film festival, began to call for projects in June 2022. After registration and two rounds of preliminary review, 16 scripts finally stood out from the 772 registered script projects. The shortlisted scripts cover families and women. , comedy, suspense, fantasy, children and other types of themes.

Among the shortlisted projects are many high-quality projects co-operated by experienced filmmakers in the industry, such as the latest project "Huaer, Huaer" by director and artist Ju Anqi, and the warm story "Dear Meiying" co-produced by director Yuan Yuan and screenwriter Chen Qiling , as well as "Looking for Cows" produced by Tian Zhuangzhuang and written by Pu Ba, the criminal investigation story "Bone Biting" produced by Wang Hongwei and written by Peng Zeling, and "Strangers in Majiaocheng" produced by Lu Le and written by Liu Xing and Duan Tingting, which are about women in the Greater Bay Area , a family love comedy "Pineapple Jackfruit" produced by Xue Xiaolu and written by Xue Chen and Xia Fan.

The shortlisted projects also include Zhu Yuanqing and Zhu Sha's new work "You Are More Charming than the Night" (formerly known as "Which Is Longer Between Wood and Night"), "Hard Bones" by Zhang Tianhui, the screenwriter of "The Murder Chaser", and "The Last Night" by Dong Fei. Ewenki Man", written by Kong Yan, tells the story of the oil exploration family in the 90s, "Late Romance", the fantasy road film "Summer of Cheri", co-written by Ru Yingqiao, Wang Yujing, and Li Songming, and the suspenseful story of women written by Gu Quan Show Window, the crime suspense work "Nine Waves" written by Luo Yan, the family fantasy story "Magic Always" (formerly known as "Harry and the Wizard Harry") written by Zhou Zhou, and the fantasy love story written by Feng Yi and Liu Jike "A Wrinkle in Time" and the family-themed work "Resurgence" written by Zhang Siqing and other script works with different styles.

In addition, with the mission and vision of "everything starts with strangers", MOMO will continue to support the gathering and interconnection of young people who love movies in Pingyao this year, and continue to support the Chinese film industry as a chief partner. The 16 shortlisted scripts will also have the opportunity to compete for the 500,000 yuan cash prize "Momo Qingyun Script Award" supported by Momo Films. The award is judged by independent judges of the Momo Qingyun Script Award. Planning, Momo Films Vice President Zeng Li, film planner, film critic, Momo Films planning director Wei Xidi, Momo Films producer Liu Xiaozhao.

The recommended works include many literary works of different types and styles in recent years. The genres are mainly novels and novels, and the themes cover suspense, love, history and other genres.

It is worth noting that the literary classic "A Village of One Man", which has been published for more than 20 years and has been reprinted more than 30 times, has become the only recommended prose work. "A Village of One Man" is composed of 78 vitality essays, describing the century-old loneliness of an idler Liu Er in Huangshaliang Village, known as a novel in prose style. The recommendation committee believes that it is very likely to be adapted into a typical oriental aesthetic film. Another novel by the author Liu Liangcheng, "Benba", was also recommended. The work is based on the Mongolian heroic epic "Janger", and it is a fairy tale epic about time.

Representatives of the recommended works will be invited to attend the Pingyao International Film Festival to promote their works to film and television copyright procurement agencies, copyright project development agencies, production companies, producers, screenwriters, directors, sellers, distribution agencies and other industry professionals, and participate in the film festival. Exhibition related official activities. In addition, Pingyao International Film Festival will provide a special negotiation space for the shortlisted works, and provide one-on-one communication opportunities for representatives of the works and people in the film and television industry.

The 6th Pingyao International Film Festival's industry unit "Developing Film Project" continues to select 12 excellent film projects with different styles and still under development, and conducts 30-60 minutes of presentations for industry professionals and film festival planners. show. Producer and director Yu Weiguo, film distributor Liu Ge, curator and film selector Wang Qingqiang will be the honorary judges of developing films, and will serve as the honorary judges of the "Developing Films Project" unit of this film exhibition. A number of honors will be selected from the Chinese film projects, and the honor winners will receive cash rewards.

The shortlisted projects include the film "Human Sea Together", which tells the story of father-daughter relationship and life destiny, produced by Guan Jinpeng and directed by Cai Jie; "Hezhou", a feature film focusing on poetic suffering under cultural fusion, produced by Wanma Caidan and directed by Zeng Jiangui; The comedy "Liaohe Taxi" directed by Zhuo Kailuo is supervised by Geng Jun, the director of the Golden Goblet Award Best Film at the Shanghai International Film Festival "Northern Tiger"; the film "One Year Old" directed by Zhao Changtong is supervised by Du Haibin, the director of the documentary "Along the Railway". A Kurong"; adapted from Ban Yu's novel of the same name, directed by Liang Ming, starring Li Xueqin's film "Xiaoyaoyou".

The shortlisted projects also include Qin Xiaoyue's family-themed film "The Nest" which focuses on the huge differences between the two generations in social change; Qin Muqiu and Zhan Hanqi's youth film "East Fourth" co-directed by Qin Muqiu and Zhan Hanqi about the "bohemian" life of two young people. "Ten Points"; the new film "Father's Taste" by Pan Jianlin, who was shortlisted for the International Competition Unit of the 61st Locarno International Film Festival; "Waiting Field" directed by Liu Yang; directed by Sun Ming, which tells the story of the protagonist through repetition. The film "Spring", which is a crime escape from confusion and find a way out; the comedy film "Ants Are No Problem" directed by Wei Dongchen, which focuses on the love of professional women; .