Wang Rugang, Guan Dongtian and Sun Xuchun are three well-known celebrities in the field of drama in Shanghai, and they are also the "Three Liyuan Brothers" who have a deep friendship for more than 40 years in their lives. After many years, the three brothers gathered in the same crew again to jointly launch a dialect drama "Barrier Station No. 51". On August 16, the main creator and cast of the show officially debuted. In this play, Sun Xuchun and Wang Rugang will not only play the role of the producer together, but Wang Rugang and Guan Dongtian will also appear on stage to play two roles in the play.
This dialect drama is also based on the Shanghai People's Burlesque Troupe (Shanghai One-legged Art Inheritance Center) as an actor team, trying to cooperate with drama and burlesque. The whole play adopts the presentation method of drama and Shanghai-style art, adding 20% of the dialect features, including the presentation and collision of different language features such as Shanghai dialect, Ningbo dialect, and Sichuan dialect.

Paying tribute to movie classics, the dialect drama "Barrier Station No. 51" reappears secretly and shows wonderful stories
"Barrier Station 51" is the memory of a generation of movie audiences. This film, which premiered in 1961, is based on real events that happened in Shanghai in the 1940s. It tells the story of Shanghai Beach during the War of Resistance Against Japanese Aggression. The story of supporting the Soviet-Central base to transport military supplies and fighting the enemy's wits and courage. The film is full of suspense, plot twists, and gripping. On the day of the press conference, Liang Boluo, the actor of the actor "Little Boss" in the film and the film performance artist, also came to the scene to share his feelings. He is also the general consultant of this stage play.

"I can say here today that my mood is very complicated. Since "Barrier Station 51" has been on the screen, its story has been growing with each generation. After a jiazi, the play can be presented again in a different art form , which also shows its artistic vitality. We just saw that this version of 'Little Boss' is very lively, full of life, and in full bloom, and the original 'Little Boss' is already gray-haired."
At the press conference of the dialect drama "Army Station No. 51", Liang Boluo was filled with emotion. 60 years ago, at the age of 22, he portrayed an underground party "little boss" who wandered among various forces on the screen, which won the audience's love and became his famous work. Liang Polo recalled that this character was so deeply rooted in the hearts of the people because its story was rooted in real life. At that time, there were indeed a lot of people on the hidden front and the second battlefield. They were doing the same or similar work as "Little Boss", so "Little Boss" became a collective name for underground workers. .

Liang Boluo said: "In the past, some red movies like "The Eternal Wave" and "Battle for Shanghai" have been put on the stage in various artistic styles in Shanghai. Now it is "Barrier Station 51". The performance can be brilliant, and it can make young people know more about the hardships and excellence of our past anti-Japanese war. I hope this play can be revived on the stage, and let the light of the people in the play shine on the way we continue to move forward. ."

The movie story of that year has been adapted into different film and television versions several times in recent years. This dialect drama version of "Army Station 51" pays tribute to the classics, but a lot of extensions have been made on the simplified story of the original version. On the premise of retaining the core of the story, Yu More details have been expanded to narrow the distance between audiences of different ages and this history. At the same time, it also strives to restore the atmosphere of Shili Yangchang in the play. Director Sun Chenxing introduced that they added some new characters when adapting the script, and also hoped to present such a perspective, as long as there are Chinese people, there will be a military station No. 51. "Three Liyuan Brothers" join hands again to try the cooperation of drama and burlesque
Wang Rugang, the head of the Shanghai People's Burlesque Troupe and a burlesque artist, has always been interested in "Barrier Station 51". He wanted to put it on the stage for many years, but he has been thinking about the relationship between burlesque and red classics. And this time, Sun Xuchun, a good brother who has always been in the field of drama production, also showed a strong interest in this subject, and the two hit it off. Guan Dongtian also participated in this work without hesitation. 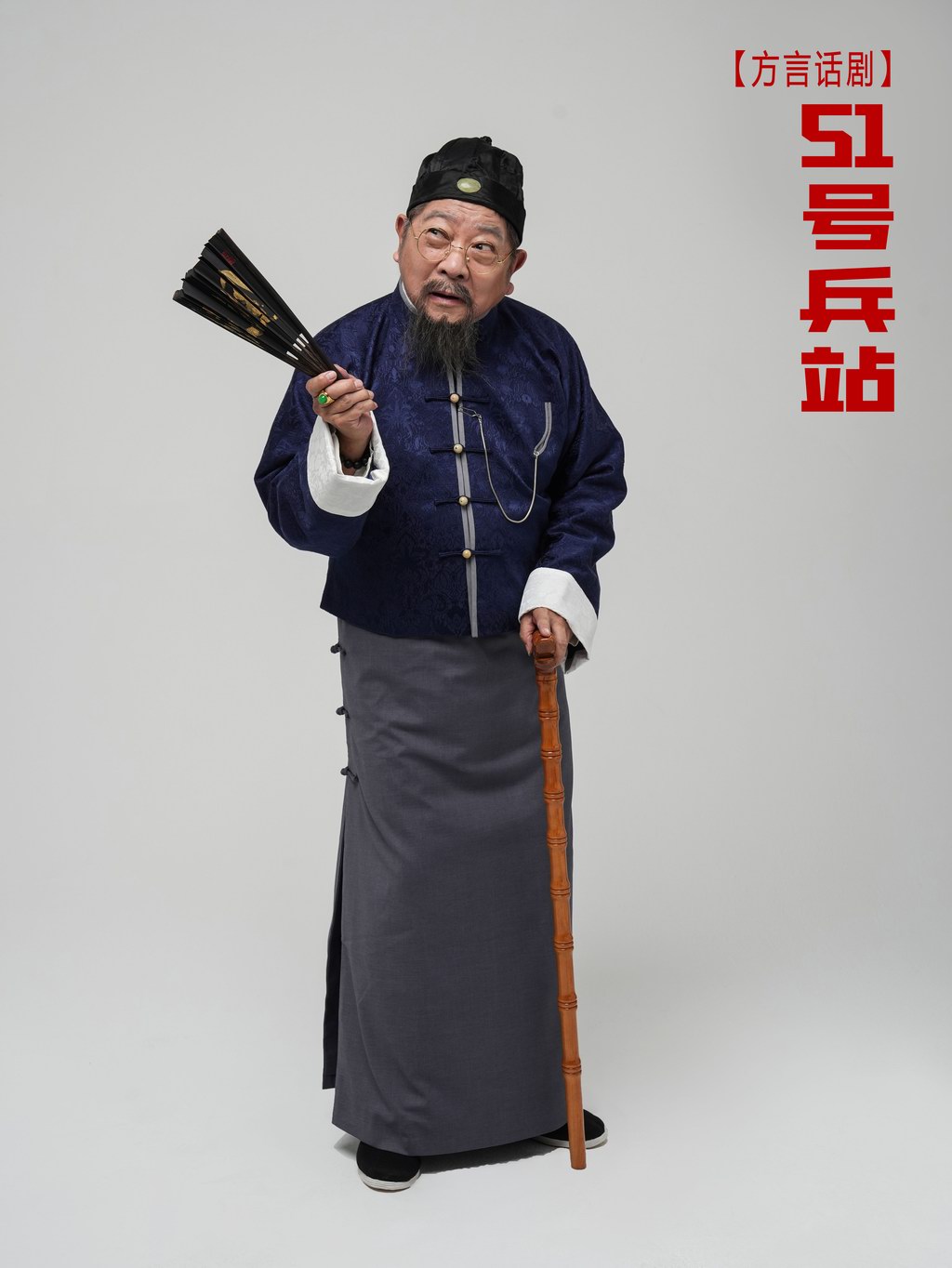 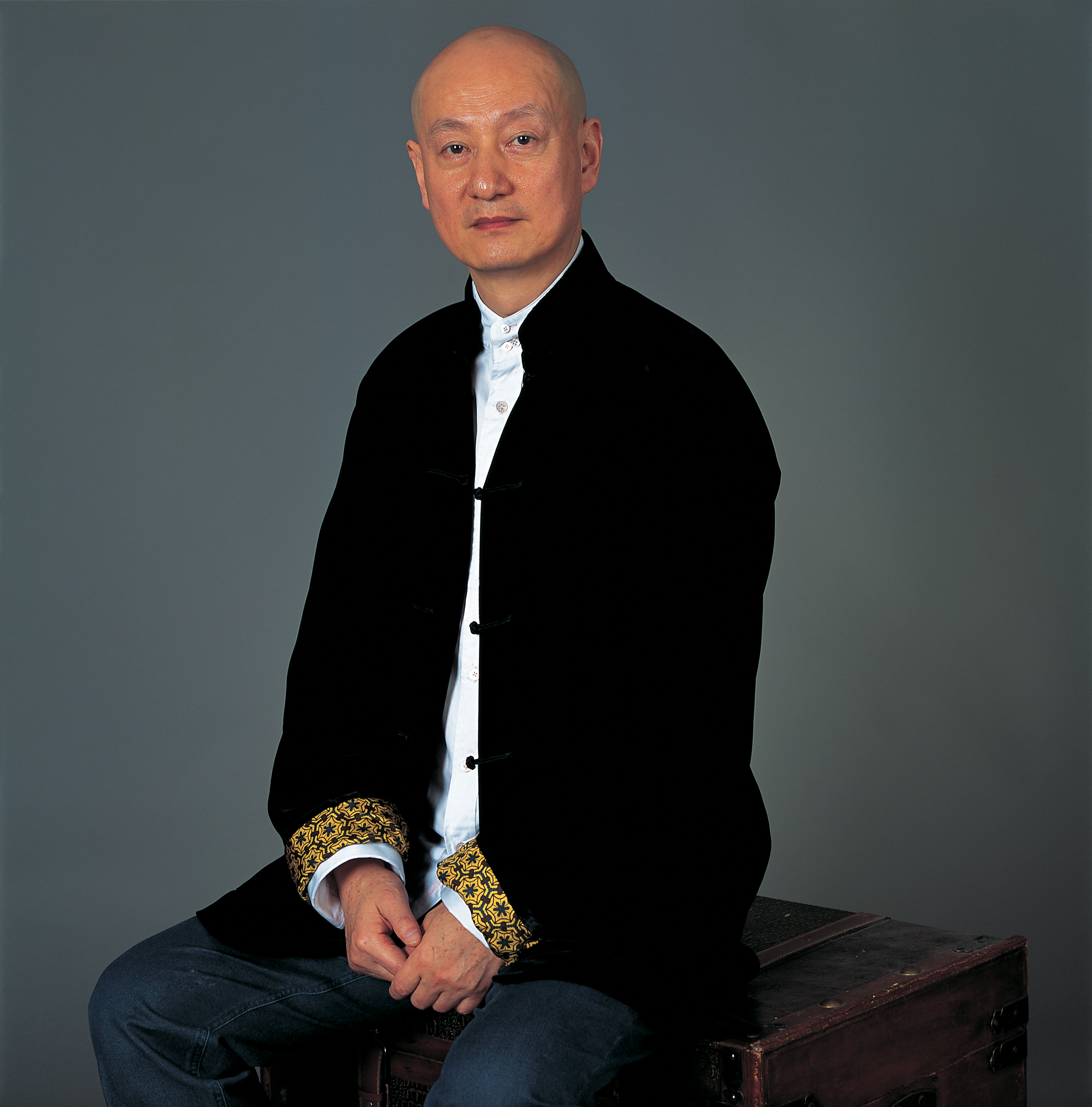 As the "Three Liyuan Brothers" well-known in Shanghai, Wang Rugang, Guan Dongtian and Sun Xuchun became attached to the first Shanghai Excellent Young Actors Workshop more than 30 years ago, and have achieved remarkable results in their respective fields over the years. The situation has remained unchanged to this day. Wang Rugang said that the three brothers hadn't blushed even once in the past 40 years. A few years ago, they invited Zhao Zhigang to hold a "Just Spring" performance together, hoping to continue. And this time "Barrier Station No. 51" is also a re-cooperation on the stage of the three brothers.
In this dialect drama "The 51st Soldier Station", the actors will work with the burlesque actors on the same stage. Except for the male lead played by the young drama actor Chen Yucheng, most of the roles will be played by burlesque actors. Among them, Wang Rugang will play Mr. Jin, Guan Dongtian will play Kameda, and comedians Pan Qianwei and Chen Liang, who are familiar to the audience, will all play important roles in the play. 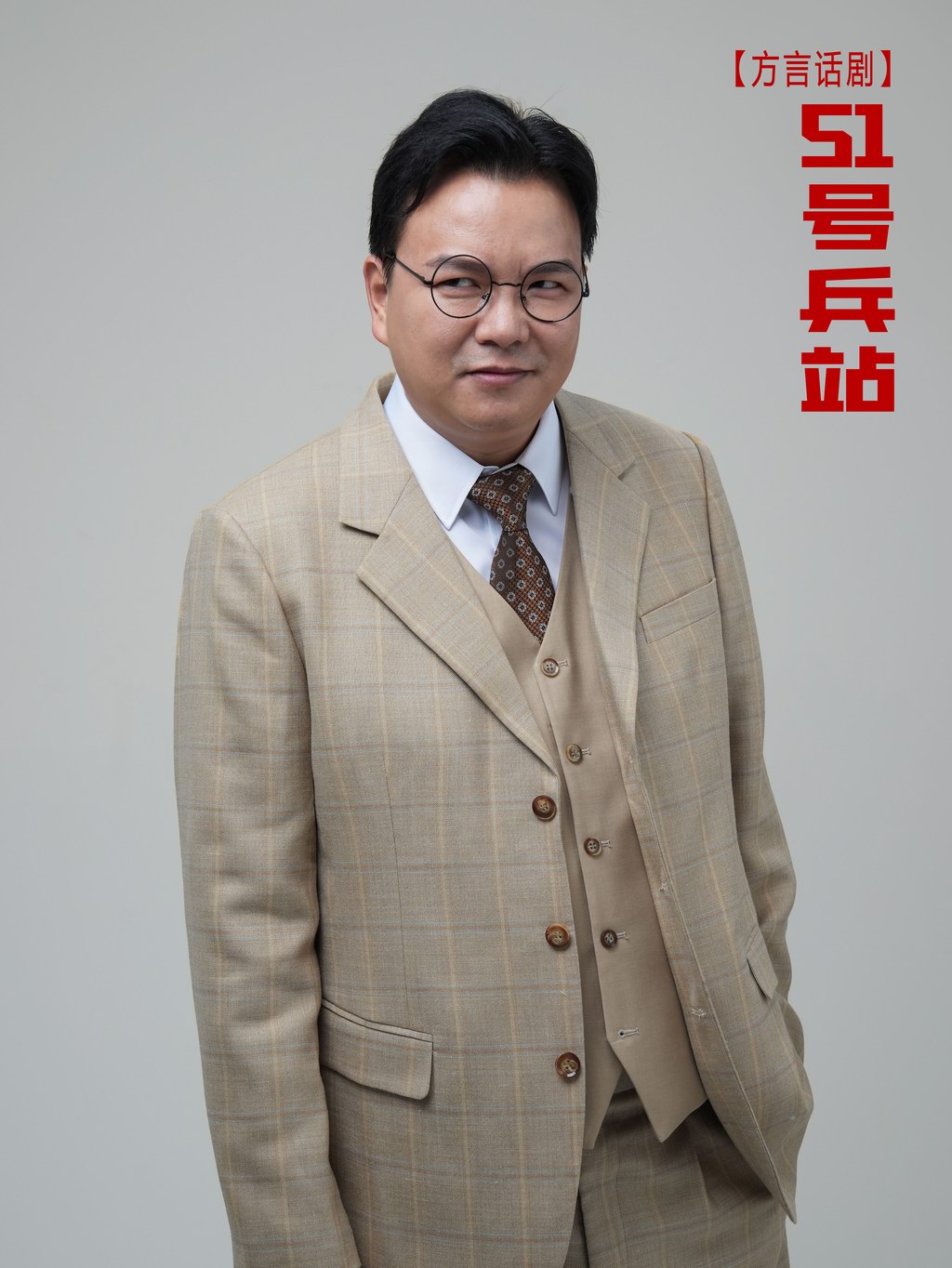 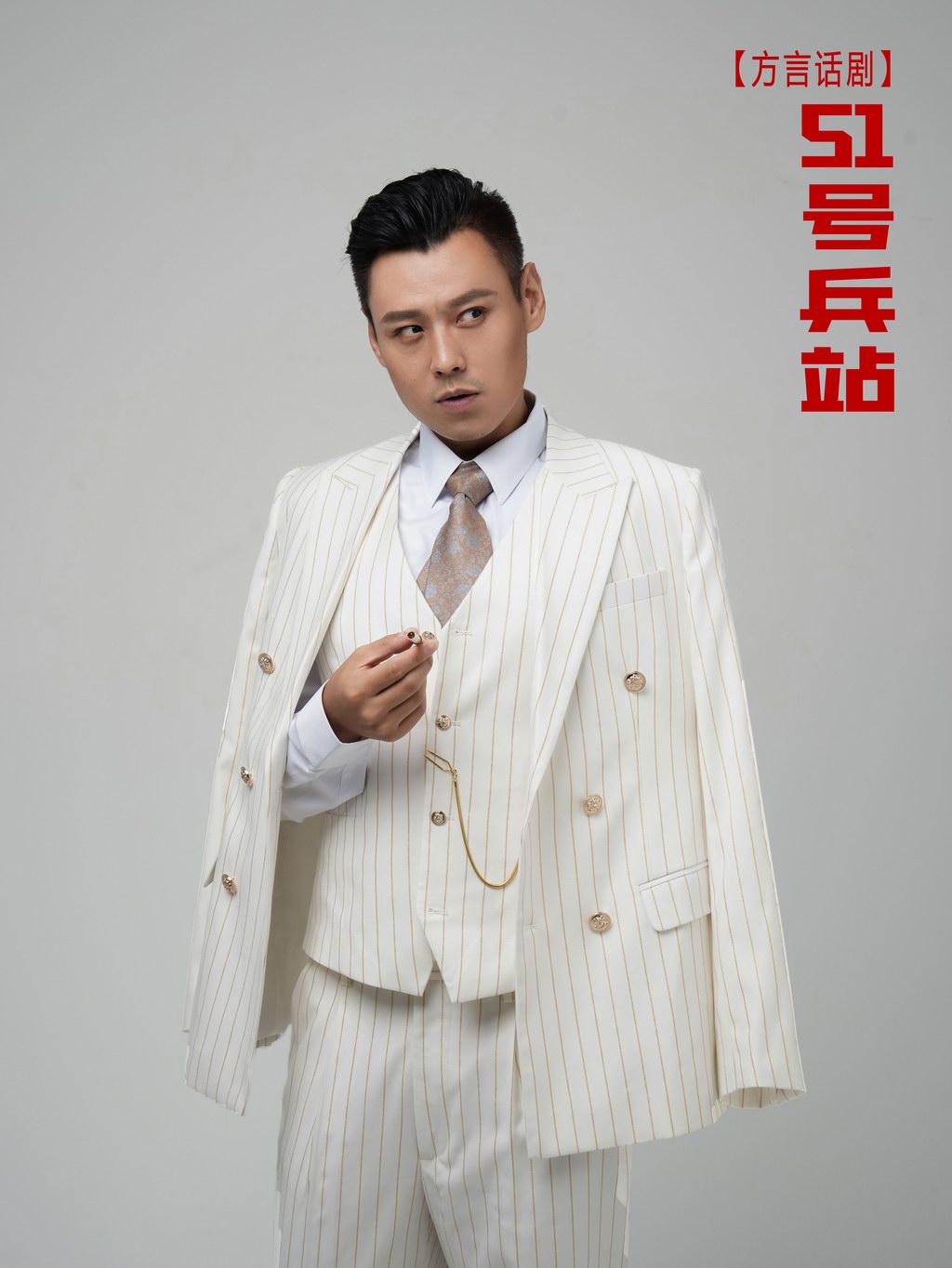 In this regard, Wang Rugang introduced that the Shanghai People's Art Theatre once had a dialect repertoire, which is actually a tradition of Shanghai stage plays. The story of "Army Station No. 51" happens to take place in Shanghai, Wuxi, Nanjing, and the Yangtze River Basin. This drama will be joined by dialects from various places, which is actually a cultural manifestation of the current integration of the Yangtze River Delta.
As for how burlesque and drama performances are integrated, Wang Rugang said, we have told the actors this time that we are acting in dialect dramas, not burlesque, so there will never be boring gimmicks or boring bridges in shaping the characters. part. What's interesting is that in order to make the dialect performance in the play more brilliant, Wang Rugang also went to the Internet and historical materials to find a lot of dialects, especially the cut jargon of the gangsters in some scenes, which also made the characters in the play more vivid and the scenes more in line. History is real.
Producer Sun Xuchun said: "Although this is not the first attempt, such a combination is highly suitable for this work. This work is a red classic, but it must be presented in a Shanghai style, so the way of performing the burlesque is appropriate. The comedy elements are lit up. The performance of the drama perfectly presents the tension of the drama. The fusion of the two interpretation methods in this work can be said to be a very big addition."
The director of the play, Sun Chenxing, felt a lot about the combination of drama and burlesque performance. He said that the actors of the burlesque troupe are very cute, and they have one of their advantages. externalized. The stage performance actually points to internalization, which requires actors to make various adjustments on the stage. But in the end, the look and feel of this stage play and the movie are different, and I hope to give the audience a refreshing feeling.
It is reported that the dialect drama "Army Station No. 51" is jointly produced by Shanghai Jinhui Art Communication Co., Ltd., Shanghai Jiading District Culture and Tourism Bureau, and Shanghai One-legged Art Inheritance Center. It will be held from September 2 to 7. Officially opened at Shanghai Wanping Theater·Grand Theater.