Audiences who haven't seen enough of Song Joong-ki's suit style in "Vincenzo", this drama will satisfy you. 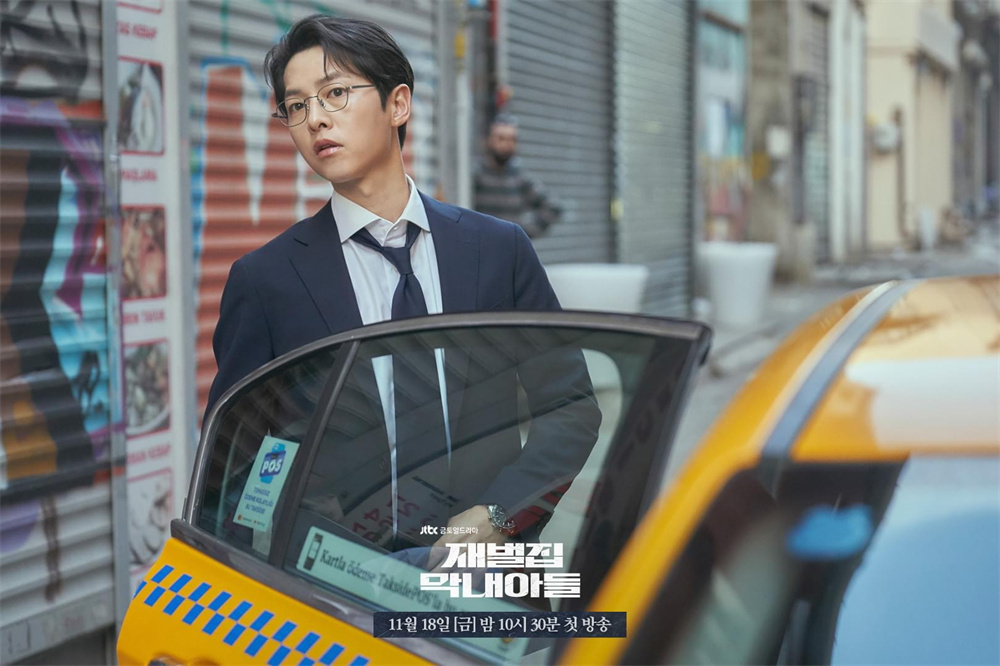 The JTBC drama "The Youngest Son of the Chaebol" starring Song Joong-ki, Lee Sung-min, and Shin Hyun-bin is adapted from a popular Korean online novel of the same name. It is a fantastic story about embezzling assets and being murdered, transformed into Chen Daojun, the grandson of a chaebol family, and traveled back to 1987 to start a second life and execute revenge plans. 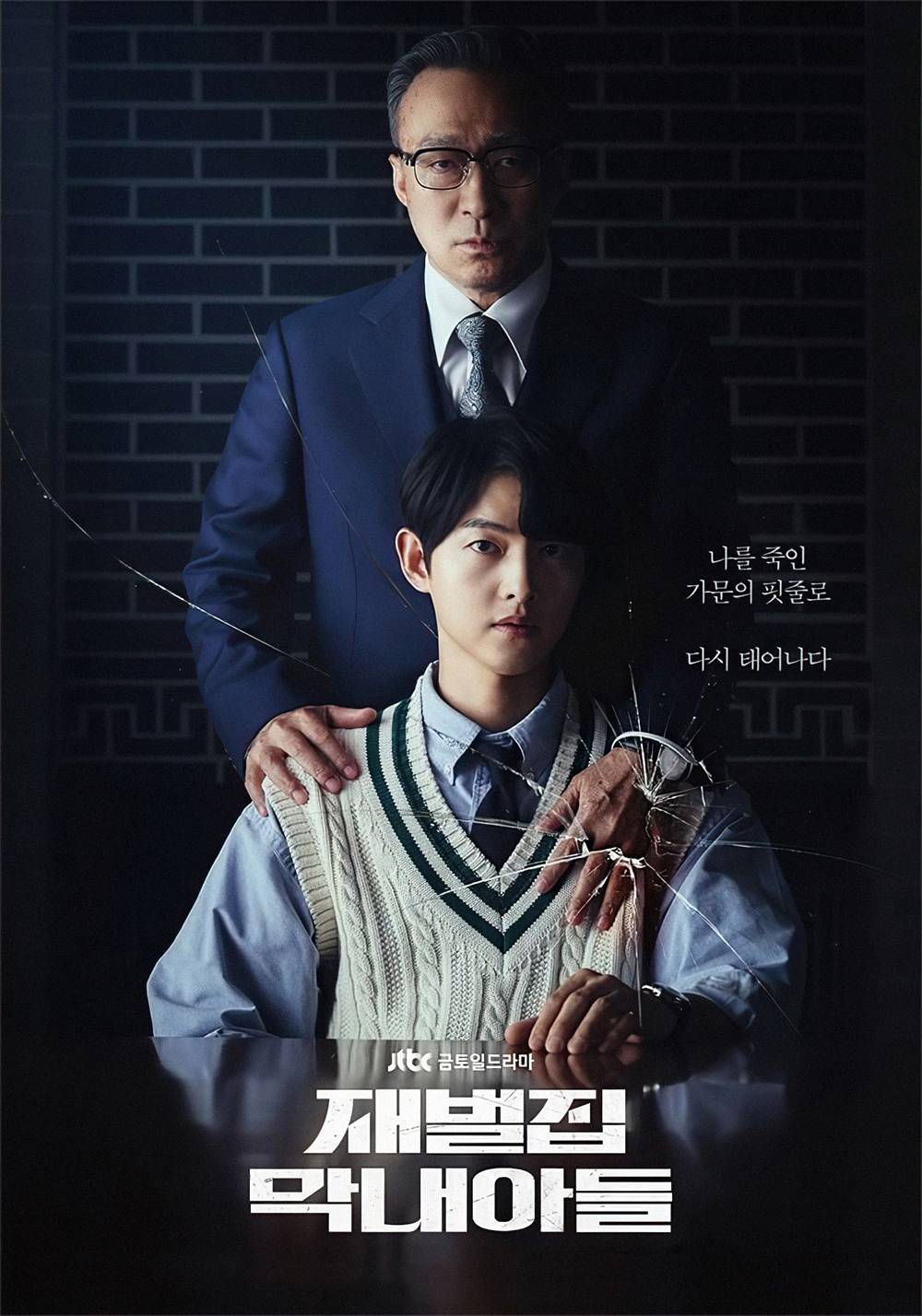 "The Youngest Son of the Chaebol" poster

This drama, from the perspective of the male protagonist, is a typical cool configuration.

In the previous life, Yin Xianyu was a pitiful laborer. You need to bring your mobile phone when you take a shower, and it is a basic operation to answer the call from the leader in seconds. On the mother's memorial day, you have to repair the toilet in the boss's ward. Either get slapped in the face by the cold big lady, or get slapped in the face by the naughty second generation ancestor. Although he is full of job skills, behaves appropriately, and can handle difficult dirty work, but in the eyes of the boss, he is just a pug begging for mercy, always standing on the front line of blame, and there is a single father at home Waiting for the offering of love with my brother.

The man who repairs and cleans the toilet for the boss

In the next life, he will become the family youngster Chen Daojun who can predict the future. With his "spoiler" investment in the political, business and entertainment circles, and his "prediction" to save his grandfather Chen Yangzhe (Li Xingmin) During the air crash, he gradually became the irritable and serious grandfather's favorite person.

The life of catching a horse that bottomed out is an enduring old stalk of Korean dramas. From this point of view, there is not much difference between "The Youngest Son of the Plutocrat" and the "Golden Spoon", which has just ended. Its advantage is that rebirth, time travel, revenge, and foreseeing the future have all the necessary elements of popular web articles you can imagine. 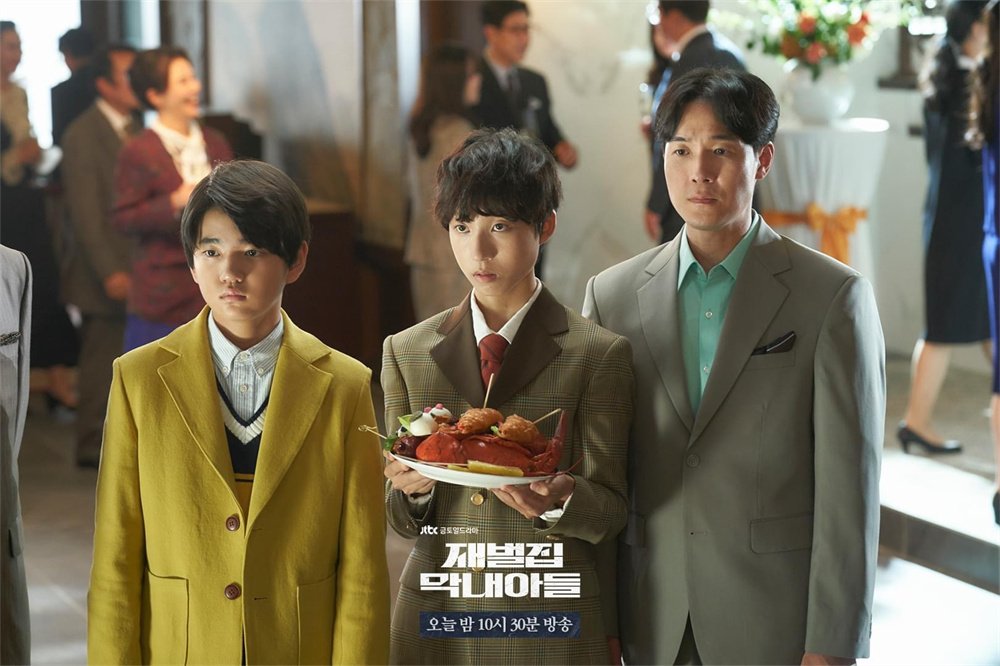 The male protagonist (first from left) who traveled back to 1987, his acting skills are so-so.

The retro look of the 1980s and 1990s, as well as Seo Taiji and the children, which caused a national sensation as soon as they announced their disbandment, this drama was dubbed "Please answer the chaebol family" by kimchi netizens, and there is nothing wrong with it. Even the lines that the supporting cast used South Korea's "kicking into the semi-finals of the World Cup" and "winning the Oscar" as idiotic dreams were confirmed by Chen Daojun's answers (we will talk about the black whistle thing another day).

Think about the Saudi team that was swept by the German team with 8 goals 20 years ago, and now they have won Argentina in Qatar; One day, "Dreams still exist, what if they come true." However, compared to the "Please Answer" series, which focuses on approachable warmth and heart, "The Youngest Son of the Plutocrats" faces the classics of the upper class - uncles and aunts with eyes above the top, frosty grandpa, the president The intertwined interest groups behind the candidates, the misfit parents in the entertainment industry who are in an embarrassing situation, and of course the upright and stubborn female prosecutor Xu Minying (played by Shin Hyun Bin). Fire and ice, the contest between ice and fire.

There are also problems. For example, the ghosts and snake spirits of the Shunyang family have not distinctive personalities, but rather symbolic. The characters of the uncles and aunts have yet to be established. 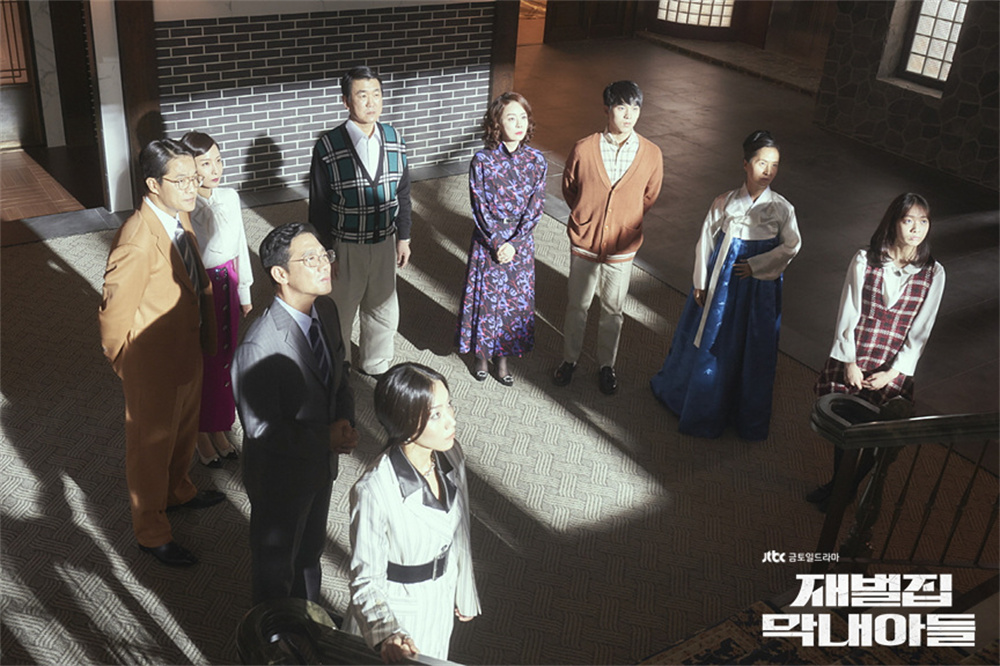 In this play of the Shunyang family, I will appear on the stage after you sing.

Right now, the three-weekly broadcasting method of this drama is faster-paced than the weekly double-broadcasting of traditional Korean dramas, which is more in line with Shuangwen's advancement. Song Joong-ki's traffic advantage as a Top Star is also reflected in the ratings of cable channels breaking 10 (it has entered the top five in JTBC's historical ratings) and Douban's rating of 8.5 (7500+ people).

So far, it seems that Song Zhongji's performance is not good, but playing two completely different roles is not a difficult challenge for him who is becoming more and more mature in acting.

Li Xingmin, the grandfather who often goes berserk and violent, is also able to act with ease. Although the plot is in the routine, the rivalry between the two is very exciting. 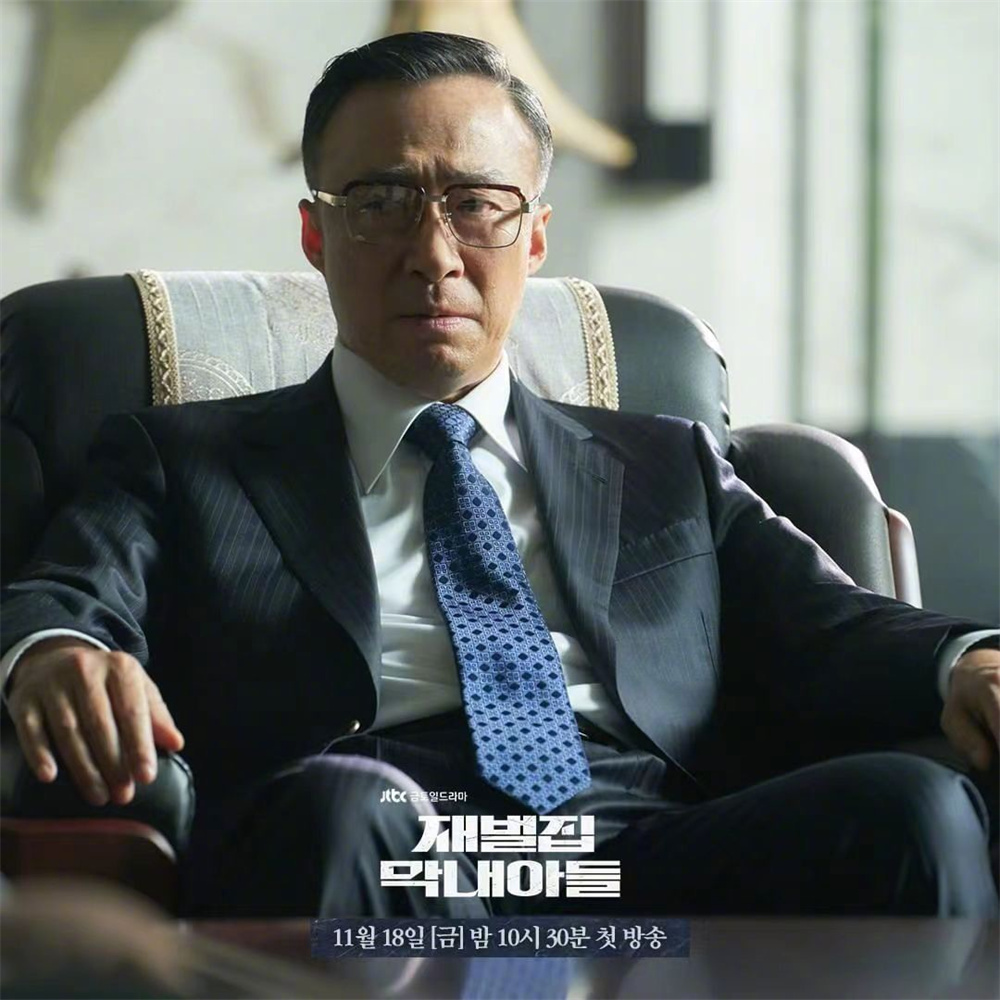 The loveline added at the beginning of the third episode is not quite right with the previous two episodes. Rather than slicking bangs to act cute and pretending to be tender, the audience seems to want to see Song Joong-ki's blackened counterattack when he is approaching the four-character prefix. After all, Smart is the new sexy. 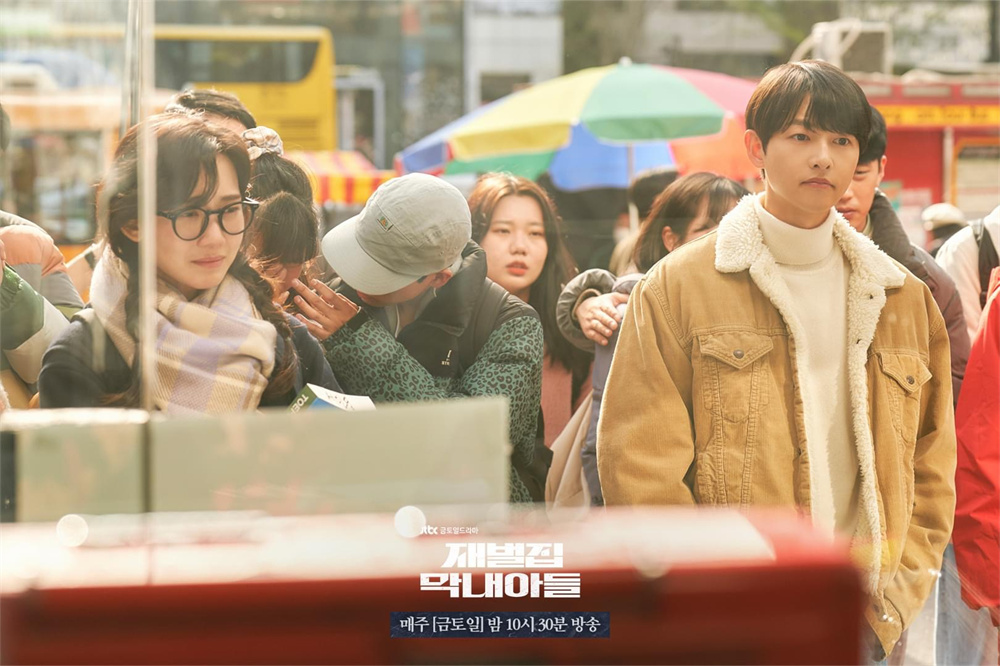 The most interesting part of "The Youngest Son of the Plutocrat" is also the most attractive part of the theme of "back to the past": the male protagonist knows which chocolate is in the box, but the box has to be robbed, and one can't handle it properly. It will also fall to the dog to eat shit. The past and the future are intertwined, gradually changing Yin Xianyu's original cognition bit by bit. The various emergencies he encountered in this life seemed to be consistent with the information points he knew in the previous life, but they were always wrong because of the slightest difference in key details. The compass of fate will always be changed one by one, and then silently return to the original point. Will the past order be fundamentally changed because of his appearance? Can this line of revenge unfold smoothly? worth looking forward to.