With the advancement of the strategy of cultural power, how to carry on the value inheritance and technological transformation of Chinese films and cultural resources, how to speed up the construction of Chinese discourse and Chinese narrative system, and how to tell Chinese stories and spread Chinese voices well have become the proposition of the current era. Representatives from all walks of life at the forum shared their wonderful views from the actual situation.

With the theme of "Chinese Context and Cultural Confidence", Shan Jixiang, President of the Chinese Cultural Relics Society and Director of the Academic Committee of the Palace Museum, recounted his origins with Xiamen's Gulangyu Island at the forum, and made an in-depth exposition around the characteristic culture of southern Fujian. The dissemination of Chinese culture should be actively "embracing" with the times.

Shan Jixiang, President of the Chinese Cultural Relics Society and Director of the Academic Committee of the Palace Museum

Shan Jixiang said that he participated in the International Tourism Alliance's Dahe Civilization Tourism Forum in Hukou, Shanxi the year before, and one of the guests was a foreign ambassador to China. In his speech, he said proudly that his country has a civilization of 5,000 years. Two thousand years earlier than your China. "After listening to his speech, I was really broken. Even elementary school students know that we have a civilization of 5,000 years. Some people in the international community always think that our empirical civilization is only 3,300 years old. Even some so-called sinologists have said this for a long time. In his speech, he adjusted the PPT and told the story of the declaration of the Liangzhu site - a 13-minute expert presentation, and speeches supported by ten countries. civilization."

"I visited the Gulangyu Historical International Community in Fujian. Many people think that Gulangyu is a beautiful island. In fact, it is not just a beautiful island. It is one of the earliest historical international communities in our country. The earliest islanders lived in some foreign countries. People took a fancy to this place and started building houses. After the return of overseas Chinese in the 1920s and 1930s, new buildings were built on the island. Medical facilities, educational facilities, and cultural facilities were very sound. The island’s formulation was very progressive, very enlightened, and very open Policies. For example, it is stipulated that dogs must be kept on a leash, and you cannot change your swimsuit at the beach. These have been formulated a hundred years ago. So we entered the historical international community, and we hoped that it will become a world heritage site. A good story of China, and repeated exploration to remediate the environment." Shan Jixiang said.

Liu Xin, general manager of China Mobile Migu Company, also said in his speech that after the Xiamen Municipal People's Government and Migu Company reached a strategic cooperation in July this year, the two sides actively promoted the construction of Xiamen Metaverse, and created a world culture during the CIFIT. The first Metaverse AR night view show in the heritage Gulangyu Island. As the official partner of the Golden Rooster and Hundred Flowers Film Festival for four consecutive years, Migu insists on combining leading technologies such as "5G+4K+XR" with film culture, and seeks a common direction for exploring the digital and intelligent transformation of the film, cultural and tourism industry. On the basis of successful cases such as the Winter Olympics Ice and Snow Metaverse and Gulangyu Metaverse, Migu will build the world's first Metaverse based on the new scene of "Gulangyu Metaverse", the first island of the Metaverse, combined with the cultural and tourism IP featured in the Golden Rooster and Hundred Flowers Film Festival. Film Festival.

XR Film and Television Metaverse Factory, "To be a director, you must have an 'algorithm'"

Throughout 2022, what are the characteristics of the ecological industry development of China's film industry? The answer is given in the film industry white paper "The Road to Strong Movies in 2022" jointly produced by the Daily Economic News and the Big Data Center of Wanda Film and Television Group. This is the third time that "The Road to Strong Movies" has been released at the Golden Rooster Awards, and it is also the second time that China Mobile Migu has witnessed this moment as an exclusive partner. From the observation of 6 dimensions and the judgment of 6 major trends, the white paper presents the development trend of the film industry in 2022 from a professional financial perspective.

In the round-table dialogue session of the forum, Changjiang Ocean, the film and television production committee of the China Film Association, first spoke, "In the past, when we made movies, as a director, we only said that you have to have ideas. Are your ideas good? What do you have? Good idea? From now on, I want to add an 'algorithm', which is high-tech technology. In the face of today's situation, a different era and a different method can give film directors the weapons, The available resources greatly enrich the creation of future films.”

Jiang Haiyang said that in 2019, "The Climber" produced by Shanghai Film Studio was a producer sent by the factory at that time. "This film cannot be made with traditional shooting methods, it will definitely not be completed, or even impossible to make. After taking the task, the film must be handed in on September 20 (that year), because it is the 70th anniversary of the founding of the People's Republic of China. The three state-designated films A gift film. In the film, 90% of the content is about climbing Mount Everest, but it is impossible for the film crew to go to Mount Everest to film." 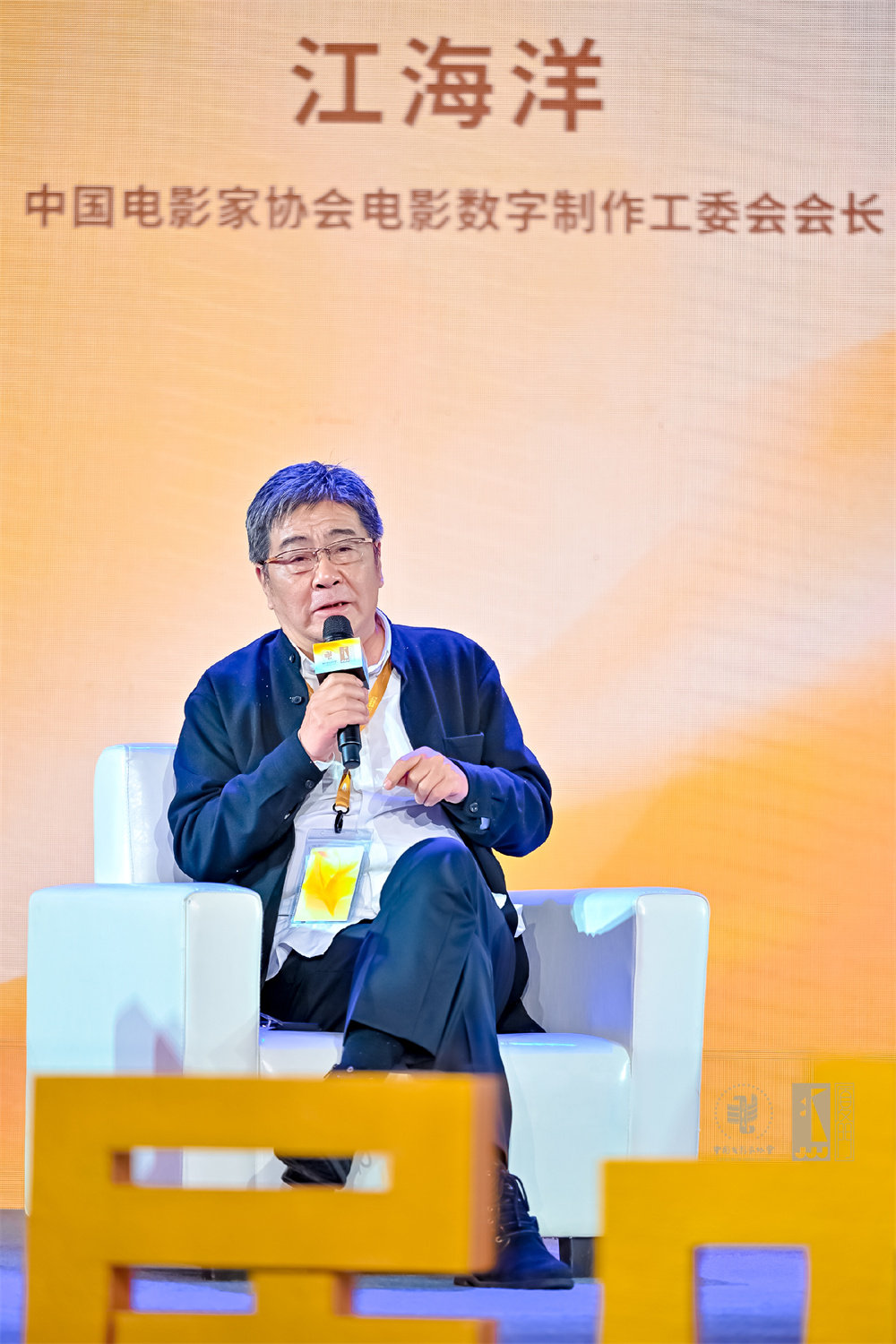 "We were filming in a quarry in Tianjin. It can be said that we did not go to Mount Everest for a day, but when you watch this movie, you probably never imagined that 90% of the content is about Mount Everest. , actually not filming in the Mount Everest area?! This incident shocked me very, very much." Jiang Haiyang emphasized at the end of his speech that no matter how technology and finance develop, no matter how new technologies are developed, people must come up with them, and ultimately rely on people. to execute. "So cultivating talents is an inescapable responsibility in any era. Today's film and television talents must be compound talents who have both ideas and algorithms."