"The 28th Law of Love": How to Watch Idol Dramas

After "The 28th Law of Love" was broadcast, there was some controversy. Idol dramas are a type of drama that can easily lead to polarized evaluations, especially those idol dramas with big IP and high traffic, and the evaluations are even more extreme. This is determined by the characteristics of idol dramas. The attribute of "commodity" is almost the most important attribute of idol dramas. The vast majority of producers make an idol drama not out of the mentality of making a masterpiece, but more of the mentality of making a "commodity that sells money", so they The priority is whether it is good-looking, likable, and popular; in order to be popular, idol dramas are highly popularized, modeled, and routine.

Over time, the idol drama has reached an invisible contract with its target audience: the audience is like buying a bag of potato chips, not pursuing nutrition, as long as it is delicious, even if it is "junk food". 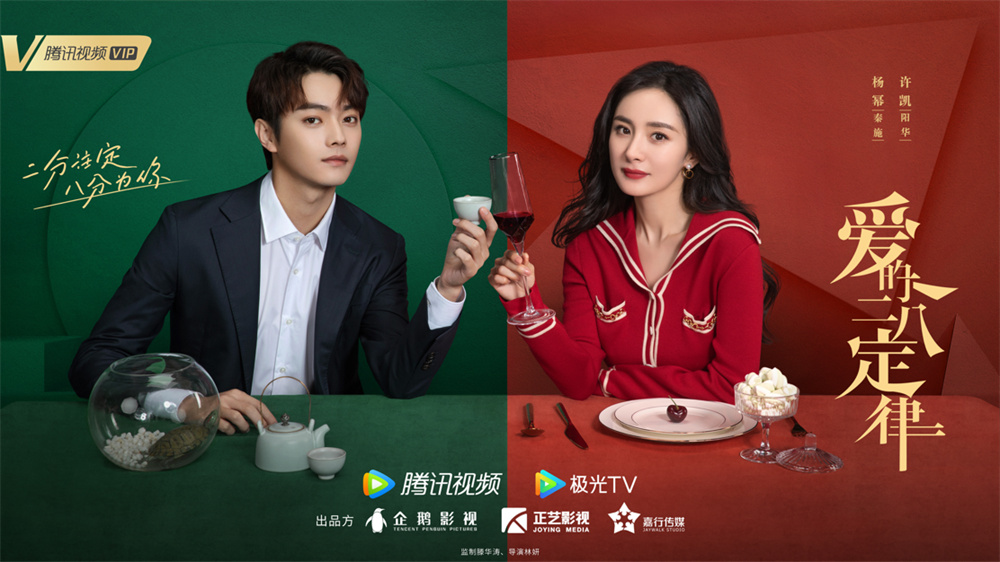 But some viewers don't see it that way. They may judge idol dramas as "masterpieces". Obviously, most idol dramas cannot stand up to scrutiny, and their logic, performances, and plots will all look ridiculous. Just like asking for potato chips based on the nutritional value of milk, they will naturally think that potato chips are nothing; or they will say: some potato chips are not fried, but they are added with protein and other nutrients, which are delicious and nutritious. Why are these potato chips Such "garbage". It is not ruled out that there are classics in idol dramas, but most of them are indeed just "fast food" and "commodity".

Whether it is the previous "Light Me, Warm You" or this time "The 28th Law of Love", you can clearly see the fierce collision of the two evaluation standards. Many audiences of idol dramas are very happy to follow, but from station B to Douban, they are also full of severe criticism. The normal public opinion ecology is to allow the existence of two kinds of evaluations, and there is no need to look down on the other or question the motives of others.

Therefore, I would like to say something on top of the pot: "The 28th Law of Love" does have many flaws, but in the category of commercialized idol dramas, it is generally qualified, and it is a potato chip that is not nutritious but tastes acceptable.

Why is this show so badly criticized? The main reason is that the setting at the beginning that makes the relationship between the hero and heroine is too blunt.

The main plot of most idol dramas is such a routine: the male and female protagonists have an "accidental" relationship—the male and female protagonists "cohabitate", and living together is more likely to cause drama—to overcome some difficulties together in the "cohabitation" and fall in love with each other. This time "The 28th Law of Love" took the script of "contract marriage", and the fake marriage made them related.

Qin Shi (played by Yang Mi) is a beautiful and sassy elite lawyer with exquisite skills and excellent working ability. However, there is a weird unspoken rule in the law firm: it is almost impossible for a non-married female lawyer to become a partner of the company. 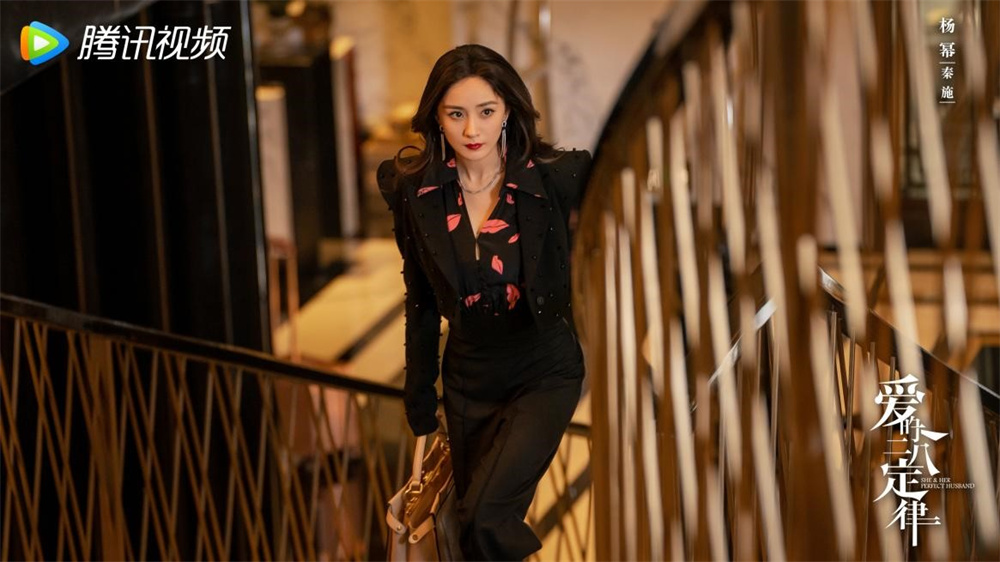 In order to enter the law firm, Qin Shi had to forge his "married" status. He found a man named Yang Hua (played by Xu Kai) from the website, and put his photo on Weibo into his group photo. The company lied that he was her husband and worked in a foreign investment bank.

By mistake, Yang Hua appeared on the occasion where all the company's top executives were present. Qin Shi could only ask him to continue singing the "fake husband". It was such a coincidence that Yanghua's mother was in a hurry to urge the marriage, and Yanghua was overwhelmed by it. Now that he has become someone else's "false husband", he took part in it half-heartedly. In order to make the play more realistic, Yang Hua lived with Qin Shi logically. 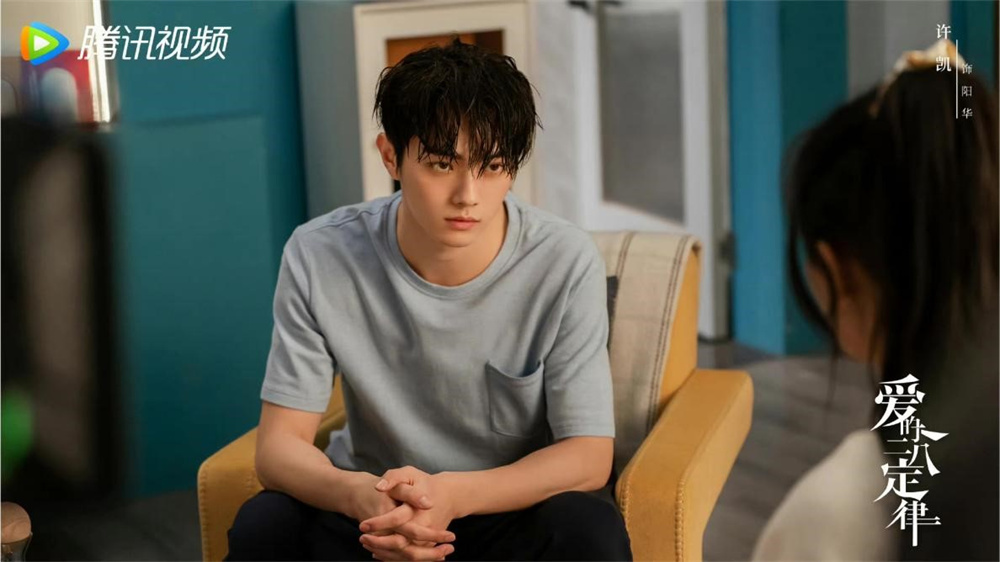 "Marriage by contract" is an old meme in idol dramas. There are a bunch of Korean dramas, such as "1% Possibility", "My Girl", "Full House", "My Name Is Kim Sam-soon", "Brilliant Inheritance" and so on. With the filter of time, everyone thinks that the previous contract marriage drama is very classic. But think back, some settings are quite "far-fetched", like the hero is a descendant of a chaebol, his grandpa or grandma made a will or gave instructions: the grandson will not inherit the inheritance if he does not find a girlfriend or get married, etc., and then The grandson went to find the heroine to get married by contract, and there was a series of subsequent developments.

In short, "marriage by contract" is just a setting. The purpose of this setting is obvious, to make the hero and heroine have an emotional relationship. There is a "fake show" before the "real action". This setting may seem far-fetched, but it is not the only evaluation index for idol dramas. On the contrary, idol dramas look at the progress of the plot after the setting.

Regrettably, "The 28th Law of Love" made the relationship between the male and female protagonists too blunt, so that many viewers abandoned the drama without waiting for the setting to unfold, and the overwhelming negative reviews came from this. This is of course not the audience's responsibility. After all, the audience's requirements for idol dramas are getting higher and higher, and there is no obligation to give them patience.

It is indeed difficult for women in the workplace, but "The 28th Law of Love" repeatedly emphasizes that single or divorced women who cannot be promoted, cannot receive a job, or cannot attend parties are considered excessive force. It is a little "guilty". 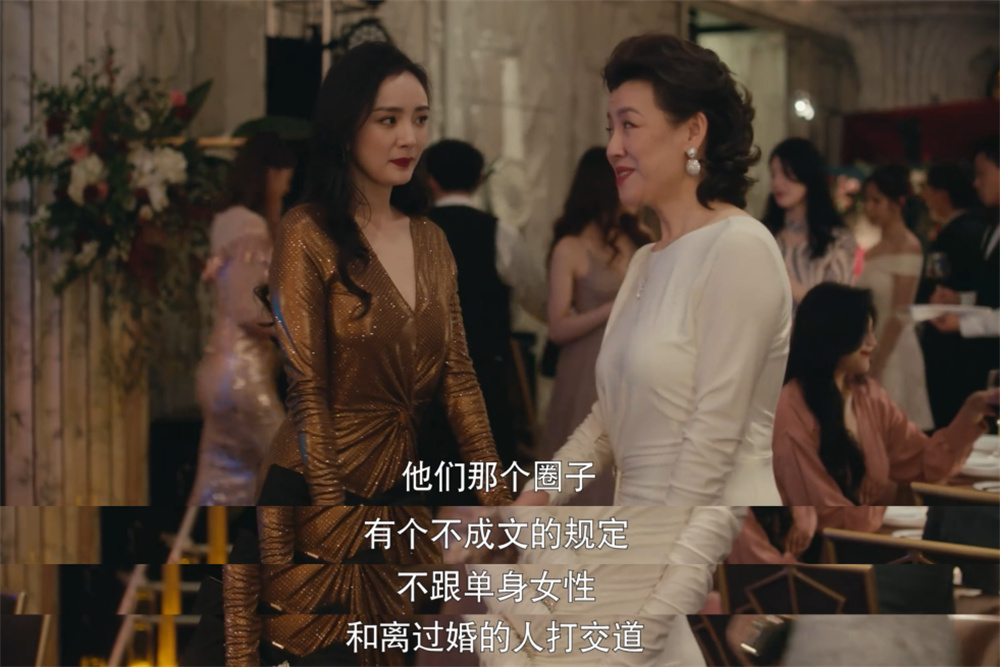 This is emphasized several times in the play

However, it was Qin Shi who arranged Yanghua to be her husband without Yanghua's consent, but she actually made a request to Yanghua that if she was found to be in a fake marriage within three days, she had the right to claim compensation from Yanghua. What kind of logic is this...?

After Yanghua once refused to agree to the fake marriage, Qin Shi's blunt output of values in the car was really embarrassing to watch.

The value is inexplicable

If the similar embarrassing scenes are deleted, it is not unacceptable for Qin Shi to lie about being married. After all, the setting is only for the purpose of "acting a fake show for real", and the latter is the real focus of idol dramas.

why say it's ok

At least in the author's personal opinion, the plot of "The 28th Law of Love" after the setting is advanced, and the filming is not bad.

"Contract Marriage" idol drama has two very stable highlights. One is how the hero and heroine guard against their "contract marriage" being seen through.

Whenever Qin Shi's "fake marriage" is about to be discovered, there will be a twist and turn, with tension and drama. For example, Li Dai accidentally found out that she almost had a blind date with Yanghua, so she questioned Qin Shi's fake marriage.

Li Dai questioned again: Why didn't Yanghua go to Qin Shi immediately after returning to China? Yanghua could only lie that he was unemployed, and was afraid that Qin Shi would dislike him, so he kept hiding it. Qin Shi's subsequent reaction was quite "dramatic". She leaned on Yang Hua pretentiously, and said pretentiously and choked up, "You idiot"...so Li Dai didn't know what to say.

It's a joy to act

At this time, Tang Yihui (played by Liu Lin), the founder of the company, also said sympathetically, "Okay, okay, you don't have a job, don't you still have each other? Your previous marriage was good, but it was too perfect. Now it’s too down-to-earth. You have a lot of problems about husband and wife, mother-in-law and daughter-in-law.” 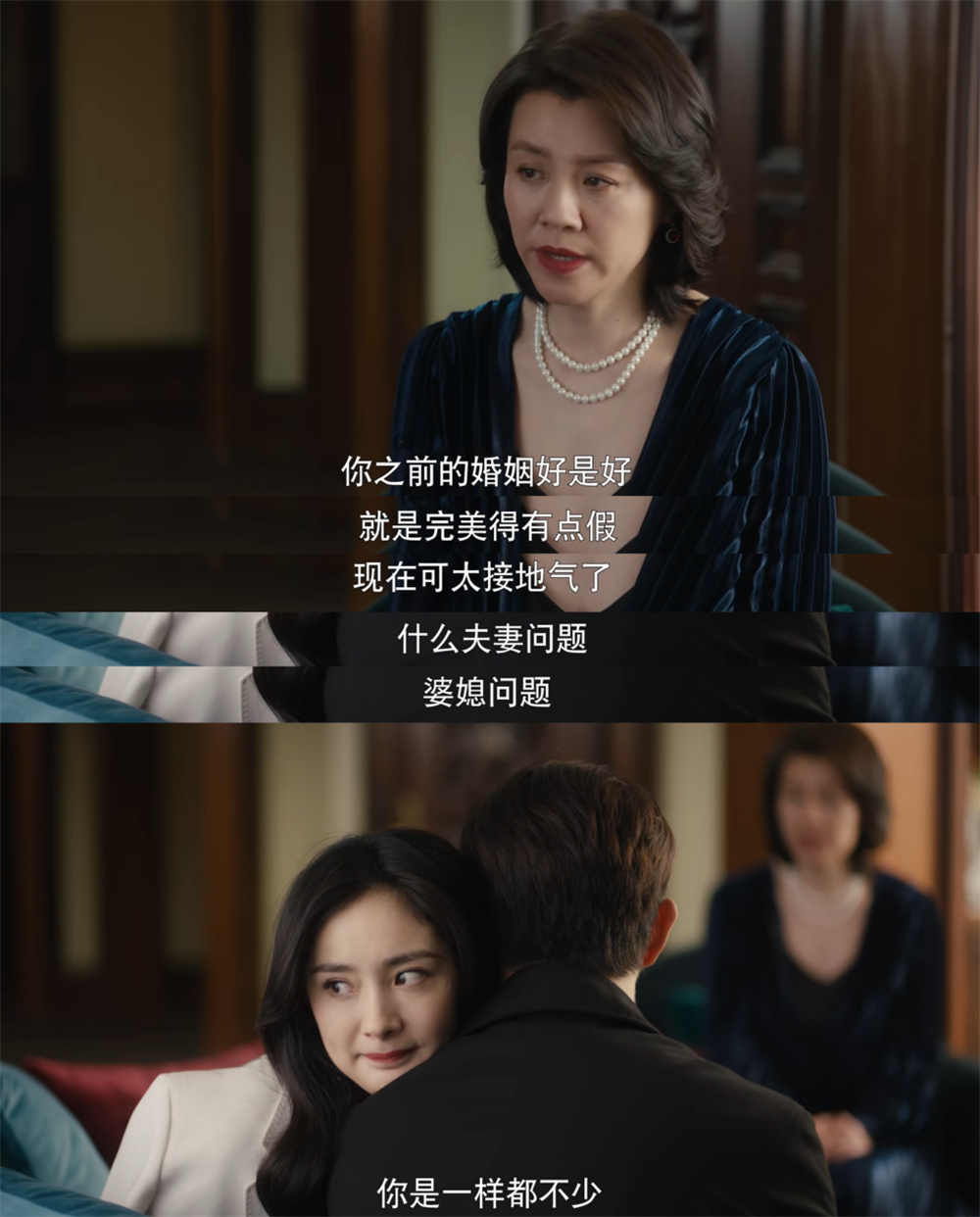 This whole plot is quite unexpected, thrilling, just right artificial, and the characters' reactions are quite interesting. 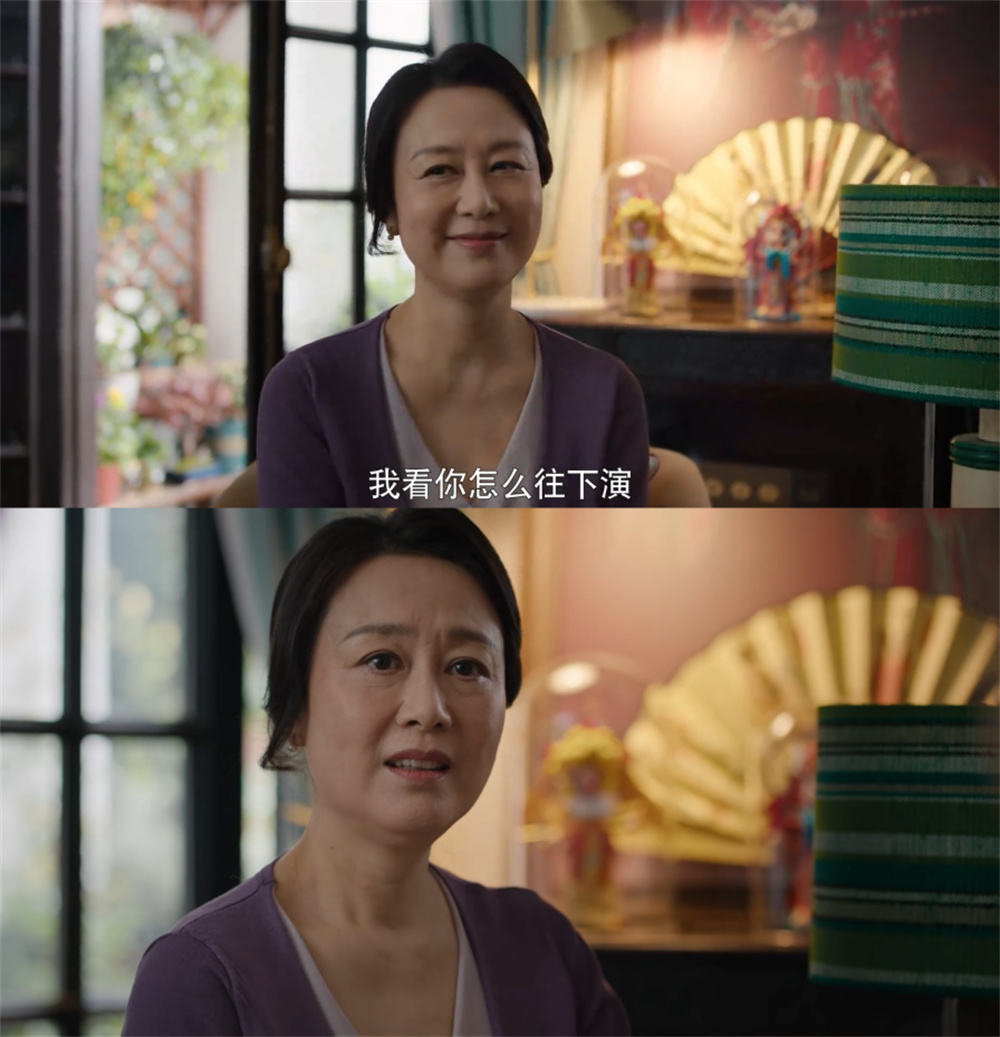 Yanghua's mother went from full of confidence to defeat

These are enough to see that the screenwriter's ability to use the setting to create dramatic conflicts is qualified, and it also makes "The 28th Law of Love" have a good dinner attribute.

Another more core point of view in idol dramas is the process of love between the male and female protagonists who "fake the show and do it for real". Whether it is good-looking or not, the lines in the play say, "It starts with appearance, is loyal to character, and conforms to the three views."

The looks of Yang Mi and Xu Kai are completely fine. Yang Mi's acting skills are normal, but this time the elite female lawyers are set, and the outfits are indeed quite charming.

Xu Kai's acting skills still have a lot of room for improvement ("I want to get off the car" in the fourth episode completely exposed his shortcomings in acting), but there are indeed few male stars in domestic entertainment who are more handsome than him. 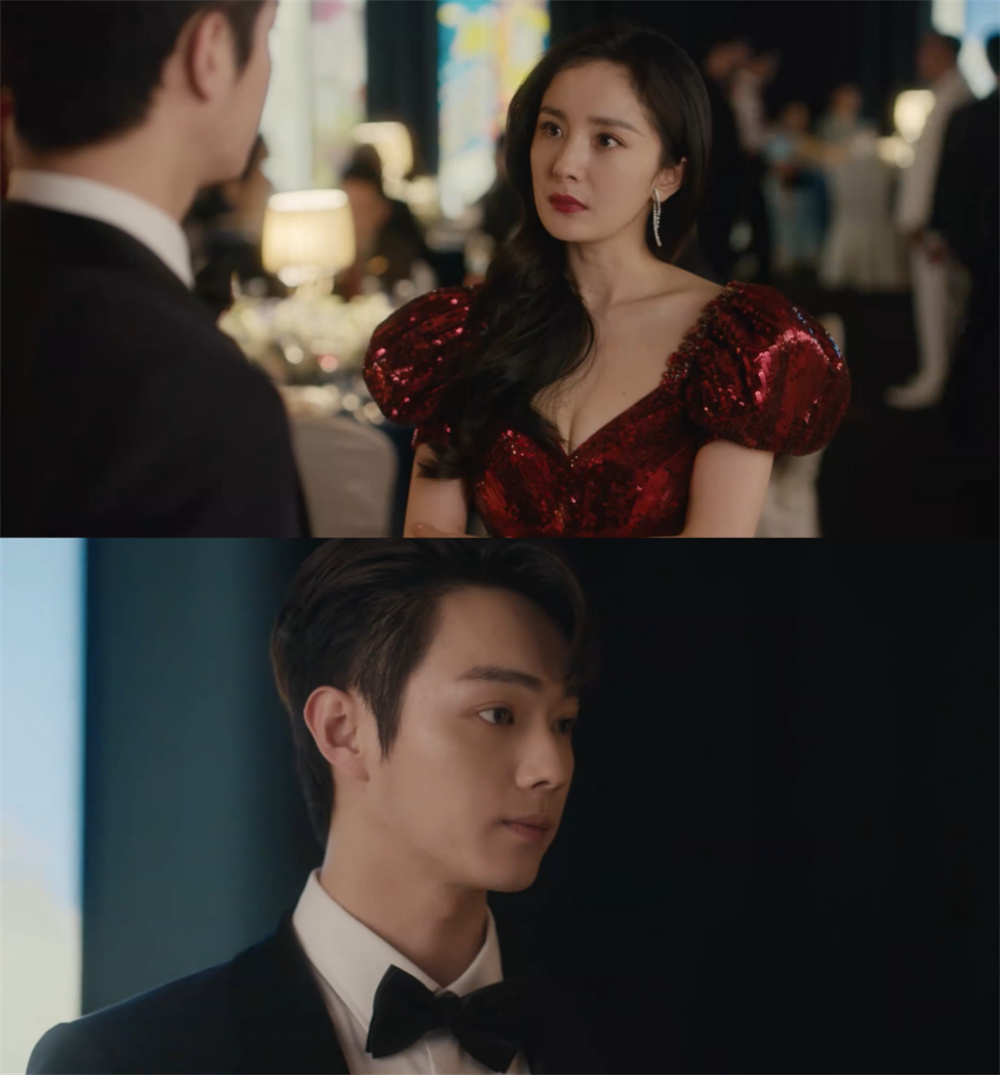 There's really nothing to dislike about the looks of the two of them.

"Character" refers to the character's personality so that people like it. Although Qin Shi's initial moral kidnapping and value output were a bit outrageous, but after the plot progressed, this workplace was tough, capable, and smooth, but he was principled, kept the bottom line, and finally reversed the unspoken rules of the workplace, while in private "flesh and blood" (Da Tiao , sloppy, casual) strong woman, quite pleasing.

Yanghua's character design is also very popular. Fudan high-achieving student, high IQ, has become a "low desire youth" due to traumatic experience, but not "love incompetent" because of it, has empathy, the ability to give and receive love, respects women, and wins in the hall and down The kitchen shows a cute side when drunk. 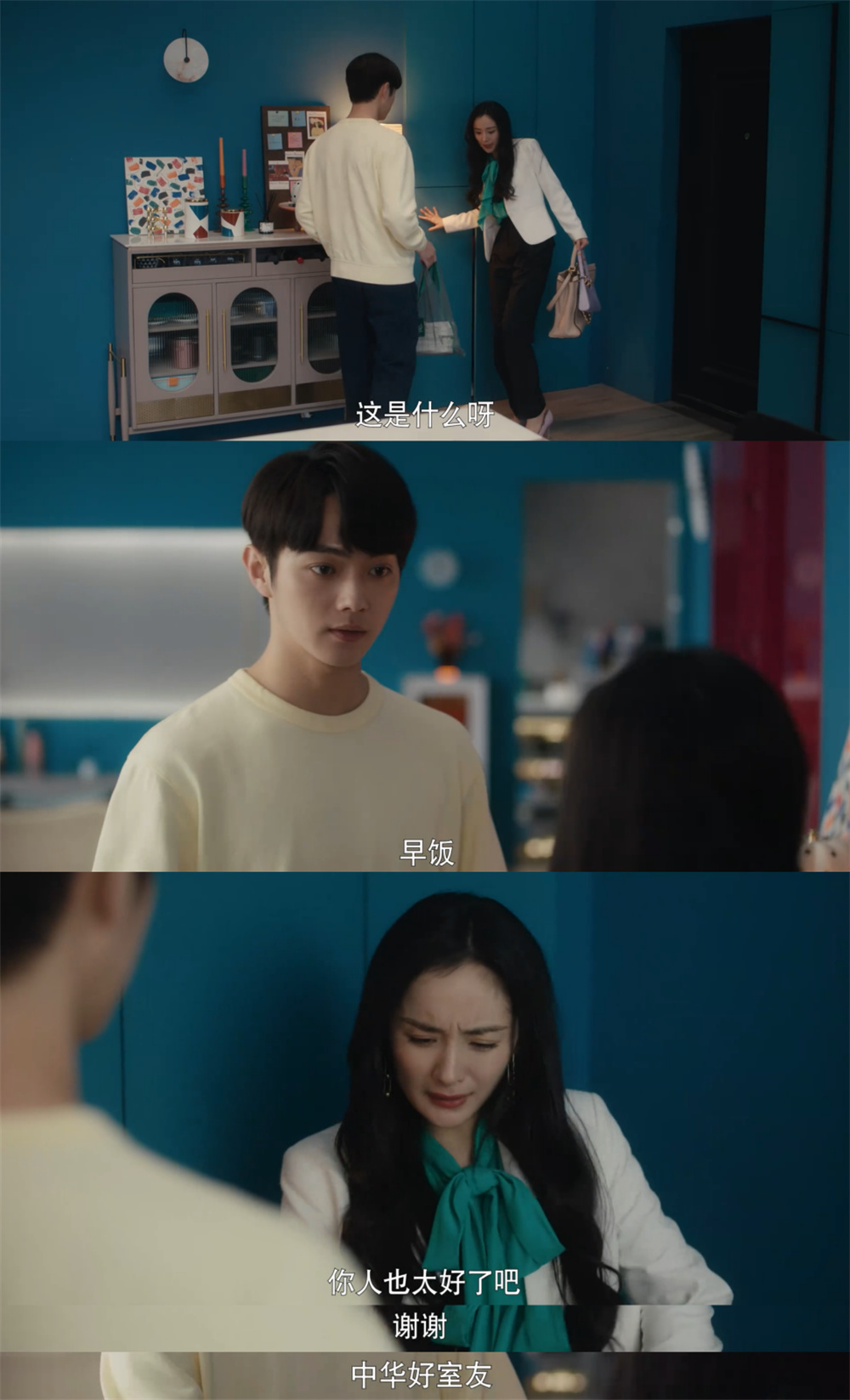 "Going to the kitchen" should be a plus

The "combination of three views" refers to the emotional model of the hero and heroine. The common emotional patterns in idol dramas include "the domineering president falls in love with me", "Prince Charming and Cinderella", "the domineering sister and the little milk dog" and so on. Although Qin Shi and Yanghua are "sibling love" this time, they did not fall into the narrative framework of "little milk dog". and so on.

Qin Shi and Yang Hua are an evenly matched "two strong" combination, and the key word of their emotional relationship is "equality". This kind of "equal" relationship is relatively rare and quite interesting. Qin Shi is very strong, but Yang Hua is not weak either. They have common topics and similar views. There is no naive misunderstanding between the two, and the emotional progress of a straight-line ball is quite enjoyable. They are also complementary. Yanghua is Qin Shi's harbor when he is tired, and the "flesh and blood" Qin Shi can also open Yanghua's closed heart. They're really a good match

In addition, the series is generally "progressive" in the expression of some values. For example, although there are workplace competitions among women, they avoid falling into the stereotype of "female competition"; a series of female group portraits with different personalities , each has its own vividness.

Therefore, it is understandable that some viewers gave bad reviews to "The 28th Law of Love" because of the beginning of the series, but those viewers who followed it up and followed it with gusto don't need to feel embarrassed. At least from the perspective of the current plot, "The 28th Law of Love" is a qualified idol drama. It's "junk food" and it's a potato chip that tastes good. It's normal not to like it, and it's normal to enjoy it.