The TV series "Big Exam" is being broadcast simultaneously on CCTV, Dragon TV and Zhejiang Satellite TV. The drama brings together the first-line creative and production team in China, focusing on the eve of the special Spring Festival in 2020, telling the stories of a group of senior high school teachers and students in a county. come. "During this period, there is youth that blends with the times, dreams that collide with reality, and countless extraordinary moments written by ordinary people in this whole society's 'big exam'."

Young actor Li Gengxi plays Tian Wenwen, a third-year high school girl in "The Big Exam". Li Gengxi also has her own understanding of the word "big exam", "It's a big test, how to overcome it." 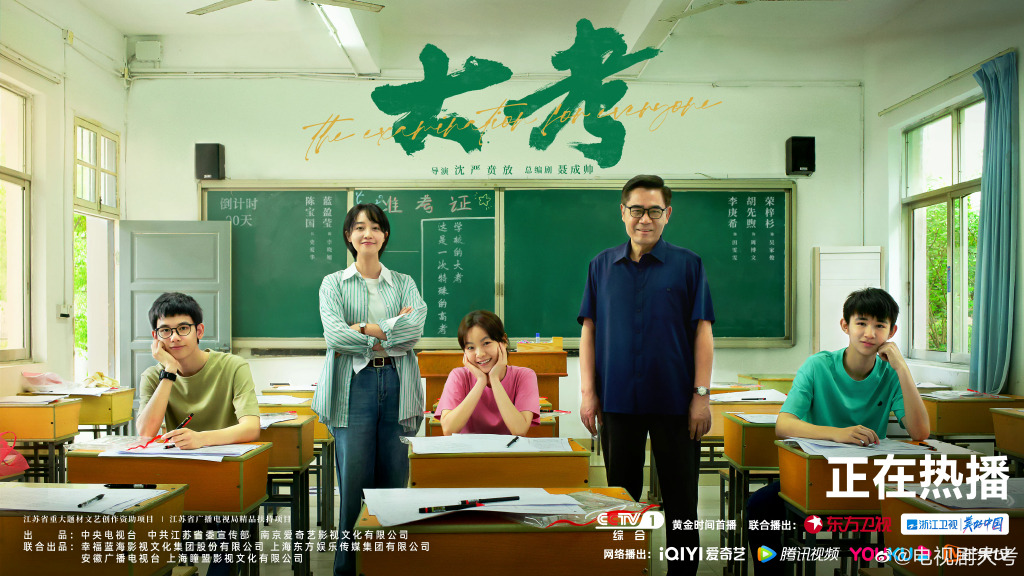 Unlike Qiao Yingzi, who was over-constrained by her mother, she played in "Little Joy" before. Tian Wenwen is a "left-behind child". Her parents work hard all year round. She almost grew up alone. Although she is young, she is independent. Whether she encounters robbers or thieves, or is sick and has a high fever, she always reports good news to her parents instead of bad news. She is really a child who makes the audience feel distressed.

"Tian Wenwen is a very sensible person, but her growth is to learn to vent." Li Gengxi said. "While being tolerant and forbearing, we should also speak out the truest thoughts in our hearts. The inspiration and inspiration that brought me is that when people face difficulties and trials, the support and help of family and friends is a very important thing. Strength, it feels very warm, and I am not fighting alone." 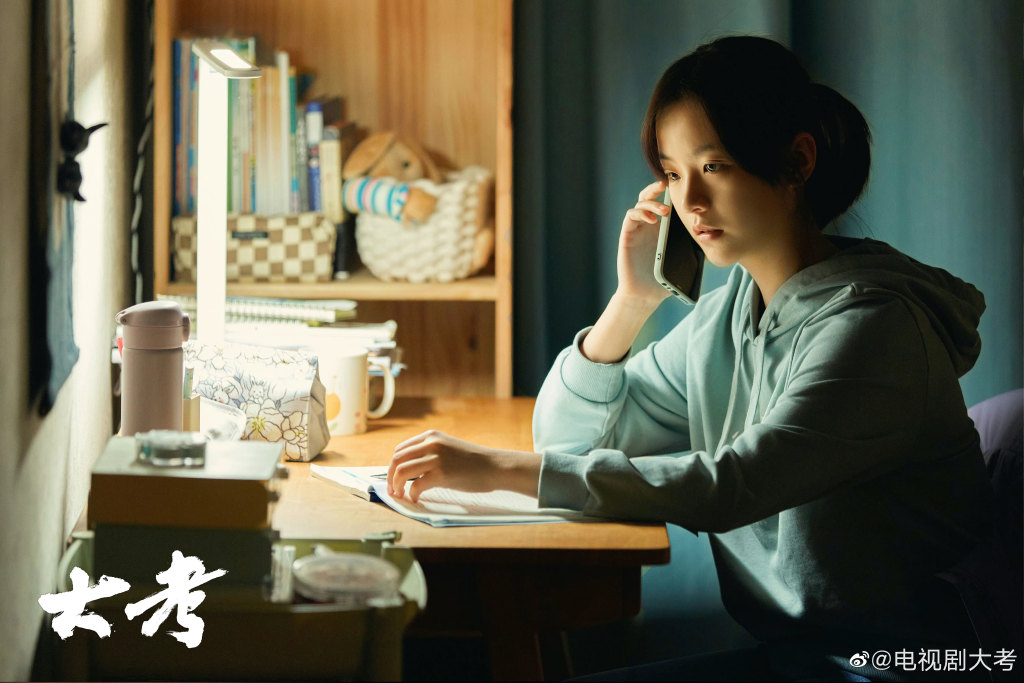 Previously in "Little Joy", Li Gengxi had cooperated with Hu Xianxu, who played Zhou Bowen in "The Big Exam". Friends of the same age were reunited, which was naturally happy, and the rivalry was also full of tacit understanding. Coupled with Rong Zishan, "We are good classmates and friends in the play, but we can't stop for a moment outside the play, and it's very noisy."

However, facing the senior actors, Li Gengxi will be "nervous" a lot. She mentioned that playing against Chen Baoguo, who played the principal, would be "a little bit afraid", "but that kind of fear was not brought to me by him, but because of my respect for him, which made me afraid of myself. I will make mistakes, I hope I don’t make mistakes and say the wrong lines.” 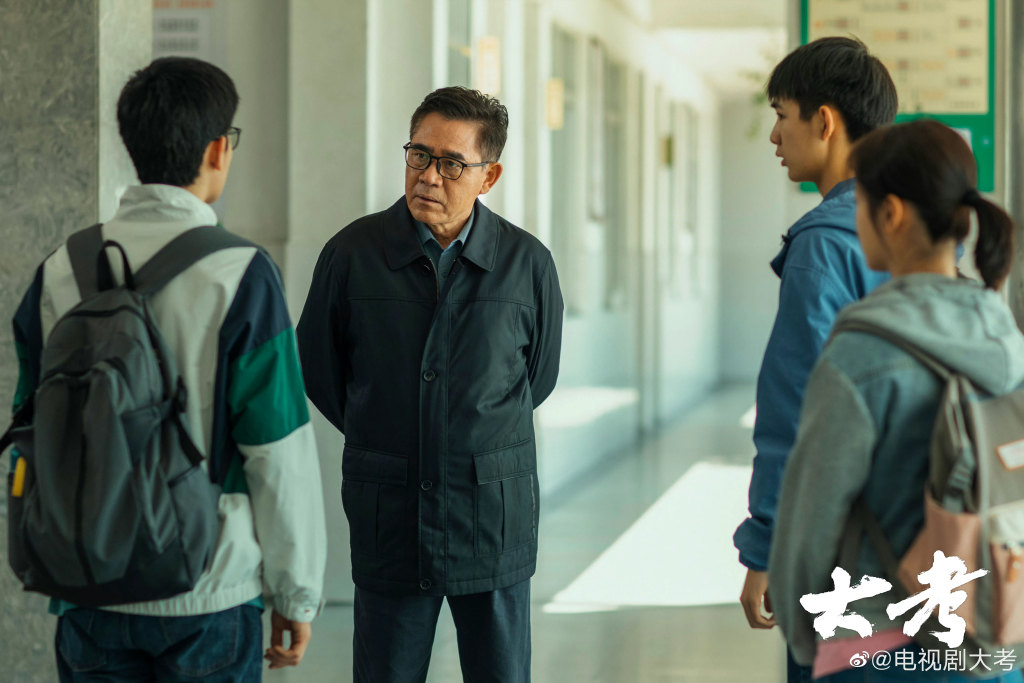 Li Gengxi also mentioned a scene in a flood. Although this scene was built, it restores the street in a 1:1 ratio. Tian Wenwen, who was alone in danger, was rescued by Zhou Bowen's father. Li Gengxi's sense of substitution in this scene is very deep, "It seems that she It's like being saved from the flood." Tian Wenwen, who has been alone and independent, received protection from her elders, which moved Li Gengxi very much.

From "Little Joy" to "Beyond", to today's "Big Exam", Li Gengxi has always been good at creating some stubborn and forbearing young girls, and in the future, she looks forward to challenging more character types that she has never tried. "I think the kind of actor I want to be is the same as the kind of person I want to be. I hope that I can be like a round dough that can be kneaded into any shape, but in the end it can return to its original shape. ." 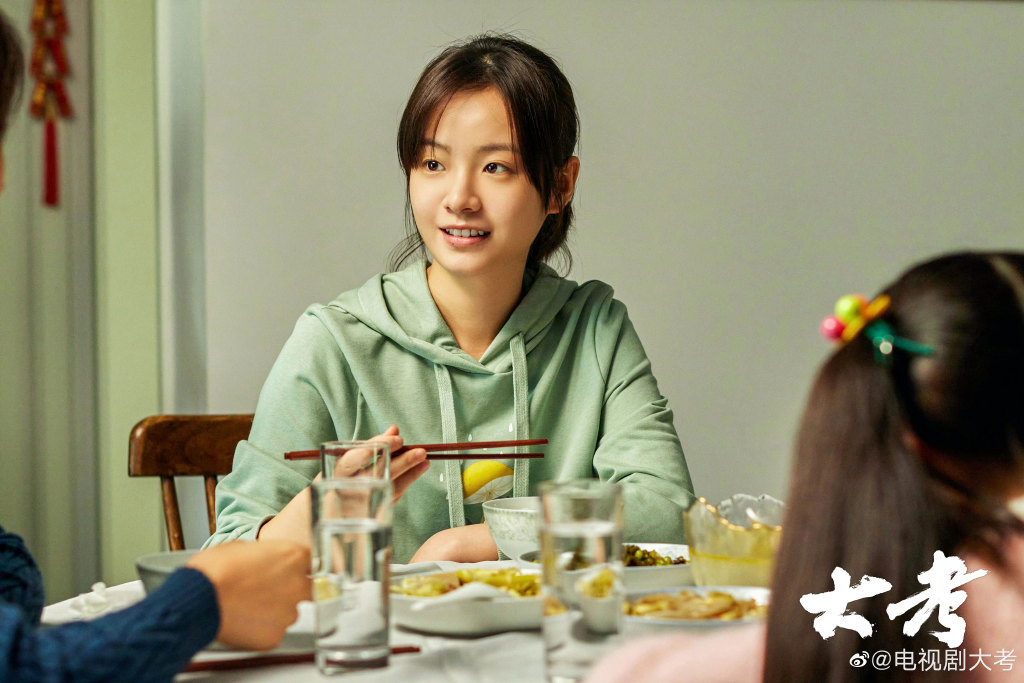 "I will feel especially sorry for Tian Wenwen"

Reporter : How did you feel when you first heard the story of "The Big Exam"? Did you do any special preparations before shooting?

Li Gengxi : When I heard this story for the first time, I felt it was a story about overcoming difficulties. Before filming, I will watch some documentaries, as well as learn about the flood in Shexian, Anhui in the summer of 2020, and usually read news reports.

Reporter : How do you understand the word "big exam"? Have you ever faced a "big test" moment in your past life trajectory? How are you feeling?

Li Gengxi : The word "big test", I think the most important word is "test": a big test, and how to overcome it. In the trajectory of my life, every scene I shoot, and the choices I make at certain points in my life are all tests of myself. At this time, my heart will be more complicated, because there will be a lot of inconsistencies. certainty.

Reporter : In your opinion, what kind of person is Tian Wenwen? In this "big test", what do you think is the biggest growth and experience Tian Wenwen has achieved? Has this character’s story inspired and touched you?

Li Gengxi : In my opinion, Tian Wenwen is a very sensible person. Her forbearance and tolerance are the best virtues. The biggest growth she has achieved is learning to vent and express her emotions reasonably. She also understands that while being tolerant and forbearing, she must also express her truest thoughts in her heart.

The inspiration and inspiration brought to me is that when people face difficulties and challenges, the support and help of family and friends is a very powerful force, and I feel very warm. I am not fighting alone. 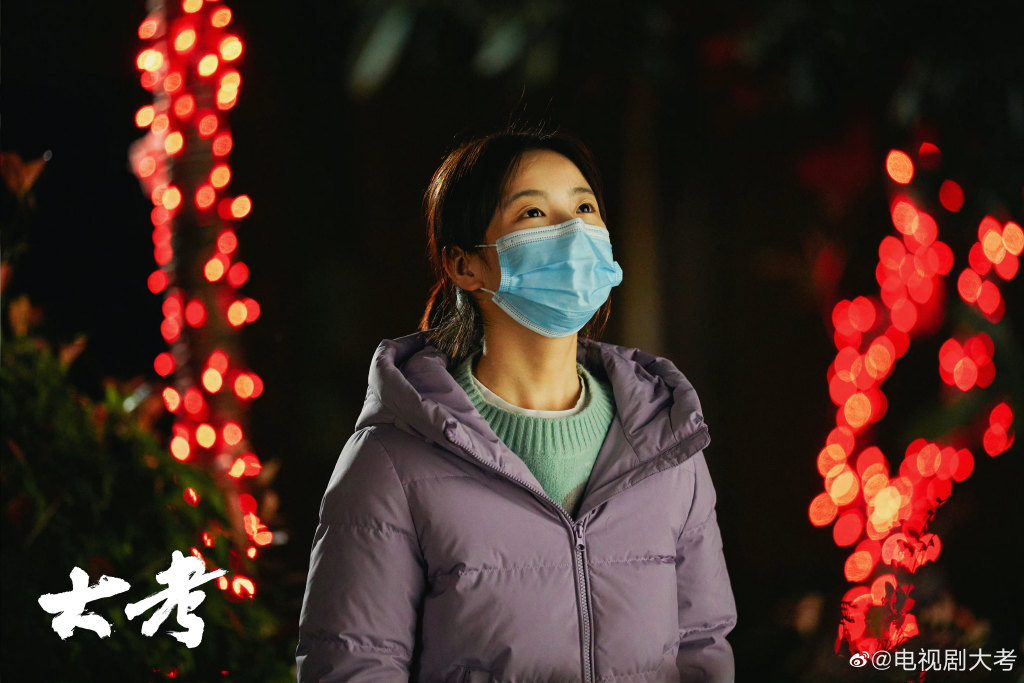 Reporter : In the process of shaping the role of Tian Wenwen, was there anything that made you feel more challenged? How did you deal with it?

Li Gengxi : The challenge is that my personality is not very similar to Tian Wenwen. I am not sure how to control her tolerance and outburst, including how to express her attitude towards her parents. I always look for materials from life, think about my own state and personality, and then contact Tian Wenwen. For example, I think about whether my friend has a personality like her, and then combine hers. Encounter, her experience to expand the association.

Reporter : Tian Wenwen is very sensible, what was the most touching thing during the shooting?

Li Gengxi : The most touching thing is that she has to do everything, control and protect herself alone. Even if she encounters thieves and robbers, she still has to face it alone. , I dare not tell my parents, because I am afraid that my parents will be worried, which makes me feel the most sad. Maybe ordinary children would do the same, but when I put her on her, I would feel especially distressed, because she was the only one living in the Tian family's ancestral house, and she was still alone when it got dark.

"I can be anything and I can stay the same"

Reporter : In the process of character shaping, did you design some small details separately?

Li Gengxi : I'm not very good at designing such small details in the process of character creation. What I care more about is how to let the audience see the character's characteristics through eyes, expressions, and the character's posture, such as how to let everyone see that Tian Wenwen is a character A very forgiving, sensible, and even a little cautious girl.

Reporter : Share a scene that touched you the most?

Reporter : Netizens call you a "specialist in the college entrance examination", and Qiao Yingzi, who plays Qiao Yingzi in "Little Joy", is also a high school student. Compared with Tian Wenwen, what are the differences between the two roles? When you come into contact with a role like a senior year student again, is there anything that can be exchanged during the performance?

Li Gengxi: Tian Wenwen and Yingzi, I think they face different predicaments. Yingzi faces the discipline of her parents, the pressure on her side, and how to balance the pursuit of her dreams and the maintenance of herself. .

Wenwen's parents are not by her side and are very far away from her. All her problems must be faced and solved by herself. They all have their own problems and challenges to face.

I will not deliberately say that starting from the identity and occupation of the character, the first step in my thinking is to start from the character itself, for example, from the perspective of the person's character, family relationship, growth environment, background experience, etc.; To imagine her attitudes and emotions towards some things and some people, and how she will express, face and deal with it, this is how I grasp the role. 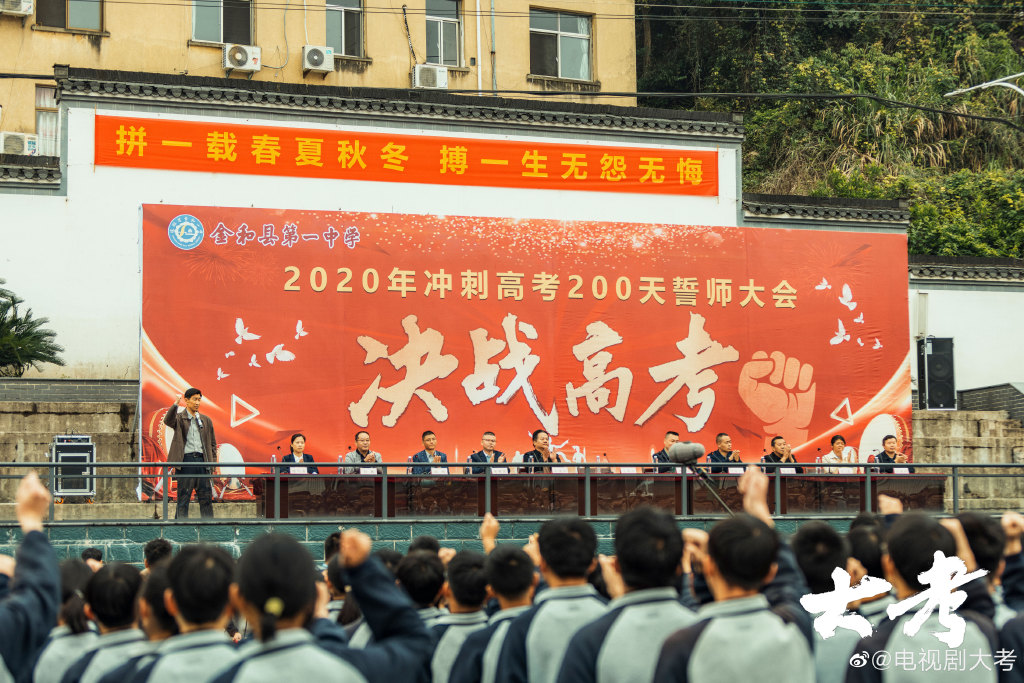 Reporter : What kind of self-requirements will you have in performance in the future? What kind of actor do you want to be?

Li Gengxi : I think, first of all, we must ensure that the general direction is correct, and then gradually improve our understanding and performance of the characters, so that the audience can have a more intuitive feeling for the characters. Of course, the most important thing is to always be genuine and to be the most authentic. In my heart, I feel that what kind of actor I want to be is the same as what kind of person I want to be. I hope that I can be like a round dough that can be kneaded into any shape, but in the end it can be changed back to the original look. I can change into anything and stay the same, that's how it feels.