Good neighbor of China! The barber cuts hair for free, and she plays "The Lonely Brave" for everyone

The hairdresser provided free haircuts for the residents of the community, and another resident played the passionate "The Lonely Brave" on the violin. On May 12, a heart-warming video that took place in a community on Xinhua Road in Shanghai became popular on social media.
The hairdresser's name is Su Ran, and the violinist's name is Liu Lijie, an administrator of the Shanghai Symphony Orchestra. The two live in the same building, each show their strengths, and use love to connect with each other to pay tribute to every hero who has carried forward during the epidemic in Shanghai.
"It was a very simple thing, but I didn't expect so many people to forward it." Liu Lijie introduced to the surging news reporter that since the closure on April 1, the residents of the community have been helping each other in the best way possible, and she has watched all the way. , very impressed.
The barber Su Ran is one of the enthusiastic residents. In the past few days, he has provided free haircuts for 20 or 30 residents in the community, including Liu Lijie's husband, and the free service will continue.
"At this moment, what can I give you in return? The text is a little thin. I can play the violin, so let's play a section for everyone!" Before the performance, Liu Lijie specially changed into a formal dress. She usually wears light home clothes when she goes downstairs to do nucleic acid work. "Since it's a performance, it's still a little bit of a ritual. Everyone is pleasing to the eyes, and I feel more comfortable." 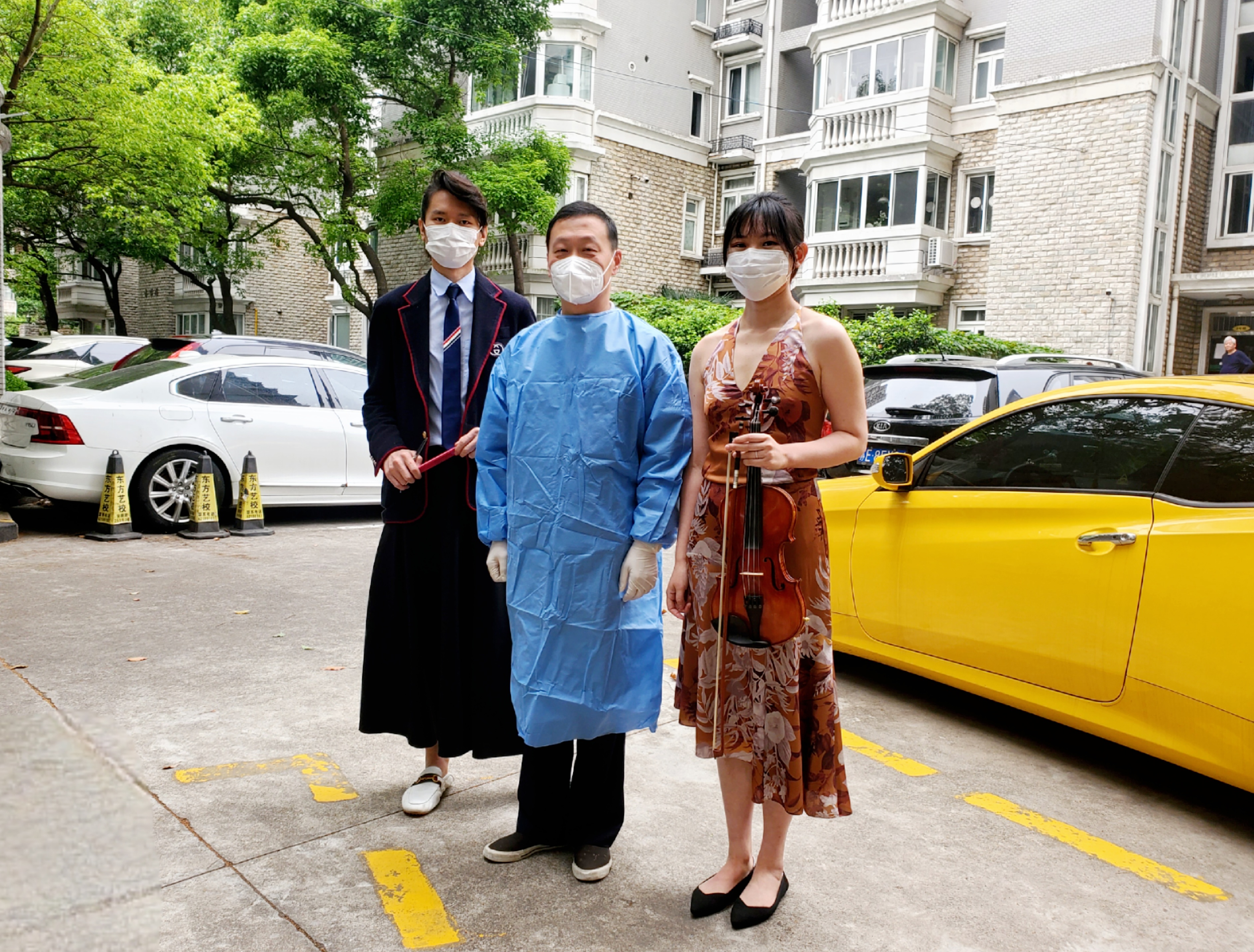 There are a total of 7 buildings in the community, and each building is 28 stories high. In order to let more people hear the music, a loud accompaniment tape was played on the spot. The passionate "Lonely Brave" reverberated in the silent community, and residents stuck their heads out one after another, took out their mobile phones, and recorded the scene. After the performance of "The Lonely Brave", Liu Lijie followed up with "I Love You, China", which was greeted with applause.
It is the property manager of the community who is getting a haircut. After more than 40 days of lockdown, he has not returned home. He has always been busy for the residents, and it is very hard. "The person who cuts the hair needs to solitary in the community group, and then the little hairdresser will call him downstairs through his mobile phone. The property manager is afraid It is difficult for everyone to line up, and they have been humble." On the same day, the barber insisted that he should serve the property manager well.
The barber brother who came to Shanghai to work hard from other places moved Liu Lijie even more. Before giving everyone a free haircut, he was so enthusiastic that he often delivered food to the elderly in the community, and even bought 200 catties of onions to give to the residents who were in desperate need, so he got the nickname of "Brother Onion", "At that time in our family, there was no onion at all. No, he knows that our family has a large population, so he specially gave me a little more."
"The neighbors are happy, and I am also very happy. In fact, the community is happy. I didn't expect it to spread." After the video became popular, friends came to ask if the performer wearing the mask was Liu Lijie, even she was in the Friends and relatives abroad also recognized her at a glance.
"This is Shanghai!" "Don't forget at any time, there is music to warm you." "Music is a beam of light in the dark, a ray of spring breeze in the cold." "Gloomy days, there is always some warmth, let You feel the light in this city." People who were touched by the video commented one after another.
"Compared with the efforts of many volunteers and big whites, this small matter of mine is really nothing to be concerned about. It is purely a small accident." Use love to spread love and warm the city with love. As a native of Shanghai, Liu Lijie hopes that Shanghai will get better soon. 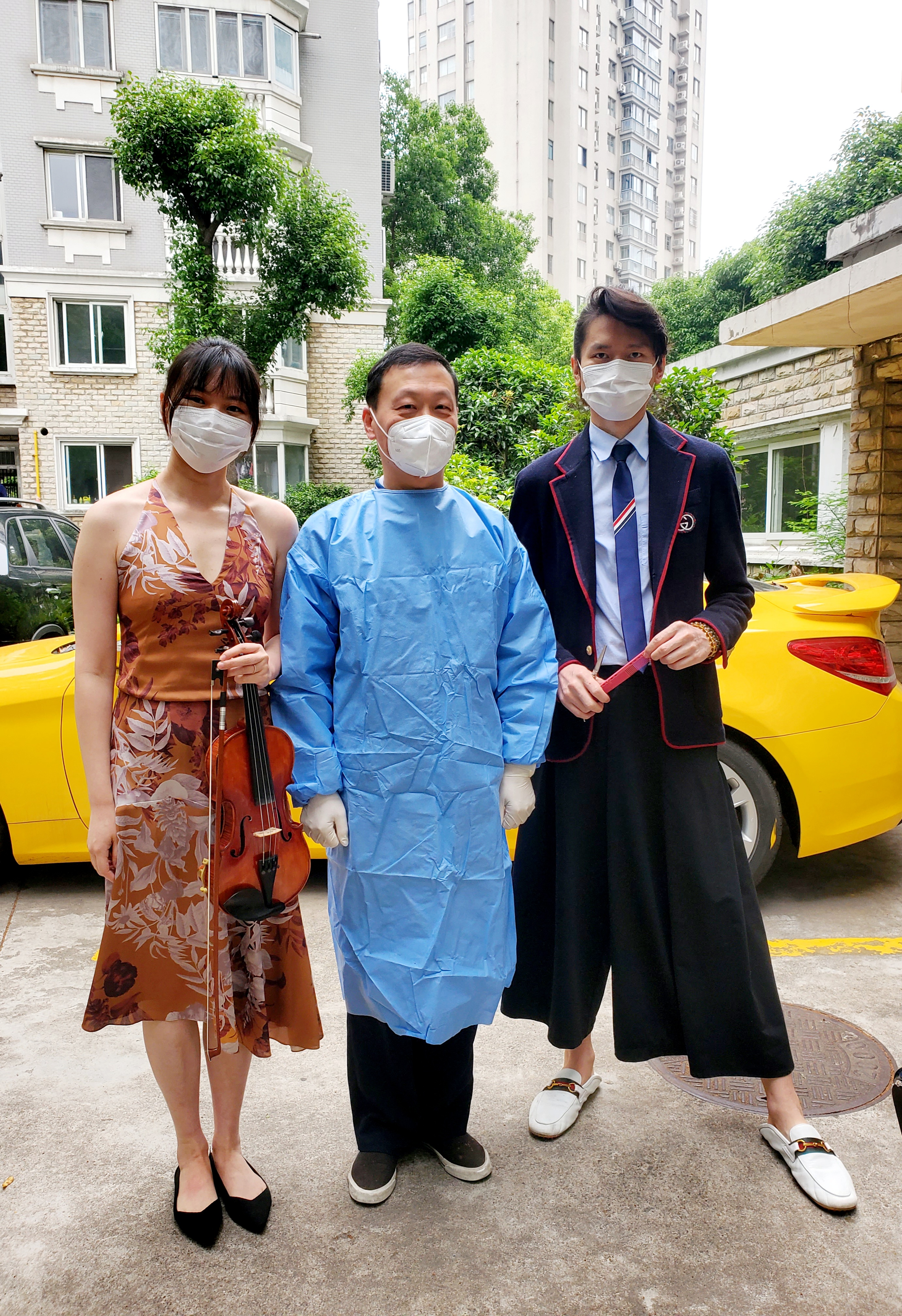 Liu Lijie is actually a professional. She studied violin at East China Normal University, and her professional teacher is Chen Huier of the Shanghai Symphony Orchestra. From 1957 to 1992, Chen Huier has been devoted to the Shanghai Symphony Orchestra. She has also performed more than 60 performances of "The Liang Zhu" with the orchestra as the deputy principal of the orchestra. The prime ministers, kings and queens of many countries are hers. guest. The founders of the now internationally renowned Shanghai Quartet, Li Honggang and Li Weigang, are the sons of Chen Huier.
"I have been studying with Teacher Chen since high school. At that time, she was already very old, and I should be her last student." By chance, in 2012, Liu Lijie joined the Shanghai Symphony Orchestra where the teacher has worked for many years. The administrative work in education is 10 years.
Interestingly, there is a little easter egg hidden behind the heartwarming video. The person behind the scenes who played the accompaniment tape and filmed the video for Liu Lijie that day was the popular suona performer of the Shanghai Chinese Orchestra, Hu Chenyun. The husband and wife joined hands to complete the video recording.
"It's fun, I'm free at home and I'm fine, so I'll take a picture with my phone." When asked why he didn't play a duet with a suona and his wife's violin, Hu Chenyun smiled to the reporter, "I was really pretty in the beginning. I was enthusiastic, but my wife said, don’t disturb the people, your voice is too loud! When the suona blew, the community was sensational, and if everyone got excited, they would gather.”
In today's Shanghai, Eason Chan's "The Lonely Brave" is a popular single in many communities, and the reason why Liu Lijie can perform "The Lonely Brave" is also inspired by Mr. Hu Chenyun.
"He played the suona first at home, and it was broadcast to station B. I thought it was very good at the time. I thought that the violin would definitely sound better." Usually, when Hu Chenyun recorded videos of home performances, it was Liu Lijie who helped him shoot and serve him , Unexpectedly, one day, the husband also did a behind-the-scenes worker for her, "My friends are joking: Well, you are more popular than him, and he is going to 'rub' your traffic now."